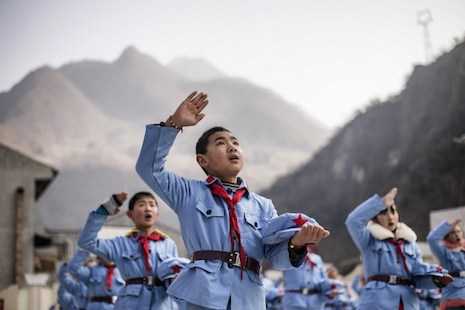 By Tom Hancock for AFP, Beichuan

In sky-blue army uniforms emblazoned with red stars, they could be Communist comrades from China's civil war. But in fact the youngsters are the targets of a modern campaign for hearts and minds, with the classroom as its battleground.

"We are the new generation of little Red Army warriors," the children sang, tunics and belts matching the ones donned by Mao Zedong's troops when they marched across China.

"We march onwards with incomparable firmness."

The Beichuan Red Army Elementary School's anthem is taught alongside revolutionary history in an extreme example of the "patriotic education" which China's ruling Communist party promotes to boost its legitimacy — but which critics condemn as little more than brainwashing.

Nearly 150 Red Army schools — funded by China's "red nobility" of revolution-era Communist commanders and their families — have been established since 2007 over the length and breadth of the country.

The jagged hills of Beichuan county in Sichuan province once sheltered Communists retreating from Nationalist opponents in the 1930s, and now echo with the voices of dozens of schoolchildren singing: "The red star sparkles. We will make the motherland stronger."

Their tight formation disintegrated into an exuberant hullabaloo as the students rushed to class, skipping past framed images of Mao Zedong and his successor, current President Xi Jinping.

"Look at this picture of the Red Army in the marshlands," said teacher Tang Jinping, as he manipulated an electronic whiteboard.

"What is your feeling about the older generations, and Grandpa Mao?" he asked his young charges.

Quick as a guerrilla fighter, a 12-year-old student raised his hand. "I feel the Red Army is very great," the boy proclaimed. "We must study their revolutionary spirit!"

Sometimes bearing names of prominent Party elders, the schools are built in "old revolutionary areas", once cradles of Communist rebellion but still often among the country's poorest areas.

The project is not directly affiliated with the People's Liberation Army, but its dual aims are to "improve the backward educational conditions" in such areas, while "spreading the Red Army spirit", according to its website.

Its founders are listed online as the wives of former top politician Li Ruihuan and Marshal He Long.

"Today when the pursuit of money has spread into every corner of life... inculcating revolutionary idealism is more important than ever," it says.

The schools will "make great contributions to promoting the party's history, and the education of youth through traditional revolutionary methods," it adds.

After a decline following Mao's decade-long "Cultural Revolution", in recent decades China has stepped up ideological education once again.

Following the deadly 1989 crackdown on student protesters in Tiananmen Square, China's then-President Jiang Zemin called for a renewed focus on history in elementary schools and even kindergartens.

China's partial occupation by European powers in the 19th century — a typical primary school textbook contains a chapter titled "The humiliation which cannot be forgotten" — is at the core of the curriculum.

So is the Communist effort against Japanese invaders in the 1940s, while the Party's reign is depicted only as a period of national improvement and strengthening.

"Recalling the century of humiliation, speak about your understanding of the greatness of the new China," suggests a textbook for 12-year-olds.

Zheng Wang, an expert at Seton Hall University in the US, said: "The main message of the campaign is to say that the country was saved by the Party."

"Its main aim is to increase the legitimacy of the party after the student movement and the collapse of the Soviet Union," he said, adding that Xi Jinping, who took power in 2012, appeared to be "more enthusiastic" about the campaign than his predecessors.

The drive has been a bete-noire for Chinese liberals, who say it whitewashes the party's often violent history and stokes nationalist fervor.

"In a sense, the Red Army elementary schools are a continuation of the Party's efforts to fool ordinary people, and create slaves of the Party," said Li Xinai, an exiled author who has written critically about the scheme. The average rural income in Beichuan county is just 540 yuan each month, leading most of the children's parents to seek better wages in cities hundreds of kilometers away.

Revolutionary spirit was about "uniting together", she said, before citing the political philosophy of former President Hu Jintao: "The first thing is you have to love your country, and create a harmonious society."

Life at the boarding school is not all discipline, and students say their hobbies include football and reading comics. But their outlook on history is well drilled.

"The Red Army beat the devils," said one eight-year-old, using a common pejorative term for Japanese soldiers. "They are good because they love the people"

Another student shared a poem he had penned in honor of a local revolutionary. "Not fearing mud he fought bravely/and killed 40 bands of enemies," it read.

Looking up from his effort, he said: "I understand that the Red Army is the Communist Party." AFP