A priest celebrates Mass with altar servers and parishioners at the Church of the Risen Christ in Toa Payoh in Singapore. (Photo: Facebook)

The Straits Times, the top English newspaper in Singapore, published an investigative report on April 12 that detailed how Catholic altar servers in an unnamed parish were involved in “inappropriate behaviors” for years, triggering shock waves among the Catholic community.

The report said that inappropriate behaviors between an adult male altar server and several young altar servers aged 11-16 took place between 2013 and 2019.

Concerned officials from the Archdiocese of Singapore told the newspaper that the adult altar server resigned in 2020, adding that the man involved was initially told to take leave of absence but tendered his resignation instead.

It also claimed he is receiving counseling on the premises of the parish and is allowed to attend services there.

Referring to the report, Mothership, a community news service in Singapore, claimed that the controversy over the alleged sexual misconduct of altar servers led to a mass resignation of 10 members from the parish’s core team in its altar servers’ society including the chairman, president and secretary.

The article speculated that the resignation spree stemmed from dissatisfaction over the alleged lack of action by the parish priest including a failure to submit a police report.

On several occasions, some parents were told to file police complaints, but no one has done so

The core team alerted the Professional Standards Office (PSO) of the archdiocese and the parish priest in 2020 after they saw a video on social media of a man and a young boy in bed in a hotel room in 2019.

The Church conducted its own investigation and the case was handled at parish level because it involved altar servers, who are not clerics but from the lay community and they assist the priest.

The PSO of Singapore Archdiocese was established in 2011 to deal with claims of sexual abuse of minors but it only deals with complaints against clerics. However, the PSO did advise and maintain oversight on the investigation.

Following the investigation, the parents of the young persons involved were told to make a police report if they wanted to. On several occasions, some parents were told to file police complaints, but no one has done so. 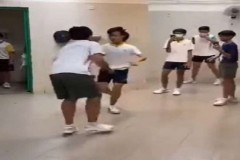 Church officials said the parents were first told to go to the police on Feb. 2, 2020, and were informed in writing to do the same on Feb. 17 when the Church’s probe committee issued an inconclusive verdict on the investigation.

Soon after the Straits Times report was published, the communications office of Singapore Archdiocese issued a statement to clarify its position and how it handled the issue.

“The Roman Catholic Archdiocese of Singapore would like to clarify that investigations were conducted by the church authorities in accordance with church protocols concerning alleged sexual misconduct by members of the laity serving in church ministries and organizations,” the statement read.

“The archdiocese takes all complaints of such nature most seriously. In this instance, the investigation was carried out by the parish priest under the guidance of the Professional Standards Office of the archdiocese.”

The outcome of the investigations proved inconclusive, it noted.

The religious community in Singapore in general is still highly conservative

The Church has done its part to tackle the issue enthusiastically and fairly, it noted, adding that the alleged victims and their families were advised on several occasions, both verbally and in writing, that it was their prerogative to file a police report.

Following the investigation, the person in question tendered his resignation, which was accepted by the parish priest. He is currently receiving professional counseling, the statement added.

However, not all were satisfied with how the case has been handled by the Church.

“They should have made a police report, especially as it involves minors. It's horrifying that the person is now receiving professional counseling on the premises of the parish," Belinda Tan wrote on Facebook on April 12.

A London-based Singaporean expressed frustration that parents of the alleged victims didn’t go to police to report the case and to seek justice.

“The religious community in Singapore in general is still highly conservative. They tend to believe in things like not airing dirty laundry or that their religious institution cannot be wrong. I think we need decades of progress before we can compare to how things are in the West,” Moses Lemuel wrote on April 15.