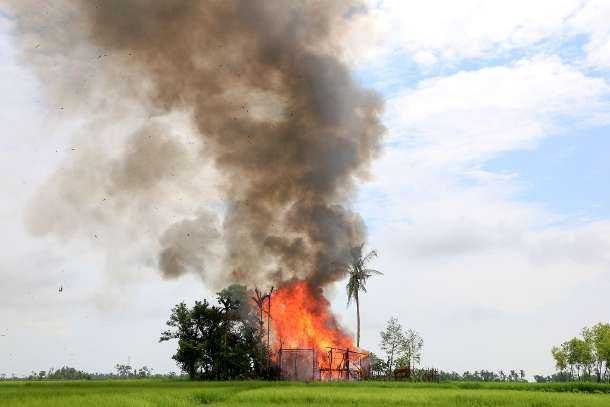 A house burns in Gawdu Tharya village near Maungdaw in Rakhine state in Myanmar on Sept. 7, 2017. (Photo: AFP)

UN High Commissioner for Human Rights Michelle Bachelet said people from the Rakhine, Chin, Mro, Dainget and Rohingya communities are suffering from the conflict in Rakhine and Chin states.

“In some cases, they appear to have been targeted or attacked indiscriminately, which may constitute further war crimes or even crimes against humanity,” Bachelet told the Human Rights Council in Geneva on Sept. 14.

Fighting is still raging in conflict-torn Rakhine and neighboring Chin between Myanmar’s military and the Arakan Army, displacing nearly 90,000 people during the 21-month conflict.

Reports of civilian casualties including children have emerged as there is no end in sight to the fighting despite calls from the UN and Pope Francis for a global ceasefire amid the Covid-19 pandemic.

Bachelet has lamented the human rights crisis in the country three years after the military crackdown in Rakhine.

“The situation of many hundreds of thousands of Rohingya refugees and internally displaced people remains unresolved,” she said.

She also noted that the names of Rohingya villages had been removed from official maps, potentially altering how the land may be used.

“It is troubling that a number of satellite images and eyewitness accounts indicate that areas in northern Rakhine have been burned in recent months,” Bachelet said.

The UN’s Fact-Finding Mission on Myanmar said that in 2019 Myanmar incurred state responsibility under the prohibition against genocide and crimes against humanity as well as for other violations of international human rights laws.

“But regrettably, no concrete measures have been taken,” Bachelet said. “National initiatives, including secretive and selective court martials and the National Commission of Inquiry, have been inadequate and fallen short of international standards.”

She urged Myanmar “to cooperate fully with international judicial and investigative bodies to ensure that justice is delivered and support the transitional justice processes, which are vital to sustainable peace.”

More than 700,000 Rohingya were forced to flee their homes in Rakhine in 2017 following a military crackdown that the UN said was executed with “genocidal intent.”

The military and government have vehemently denied the allegations and responded that the military was responding to attacks by Rohingya militants.

Last week eight of the UN Security Council’s members called on Myanmar to accelerate its efforts to address the long-term causes of the crisis in Rakhine and create conditions conducive to “the safe, voluntary, sustainable and dignified return of refugees.”

The move came days after two deserters from Myanmar’s military reportedly confessed their role in killing Rohingya villagers in Rakhine under the instructions of commanding officers during the 2017 clearance operations.