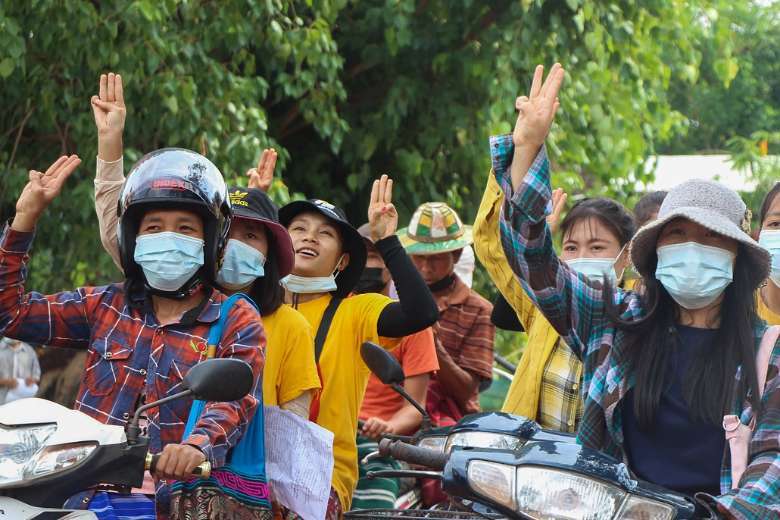 Protesters make the three-finger salute while riding scooters along a village road during a demonstration against the military coup in Myanmar's Karen state on April 21. (Photo: KNU/AFP)

Fighting between the Myanmar military and the Kachin Independence Army (KIA) has intensified in conflict-torn Kachin state, leading to civilian casualties and thousands displaced.

About 440 people were newly displaced, three civilians were killed and several people were injured due to clashes in Momauk township from April 12-15, according to a UN report on April 20.

The report said around 5,000 people have been displaced since Feb. 1 due to the resurgence of fighting in Kachin state.

The new internally displaced persons have taken refuge at churches and monasteries, according to aid groups.

Tension remains high as fighting rages in several areas since the KIA seized a strategic base in Alaw Bum near the Chinese border in late March.

Gunfire had fallen silent in the Christian stronghold following the signing of a bilateral ceasefire between the military and the KIA.

Most of Kachin’s 1.7 million people are Christians, including 116,000 Catholics

Kachin state, however, has seen renewed fighting including airstrikes by the military after the KIA warned of a resumption in fighting if the junta did not stop killing anti-coup protesters.

More than 100,000 people have taken shelter at IDP camps in Kachin and Shan states since June 2011 and they remain there as peace is elusive and with little prospect of returning to their homes.

Most of Kachin’s 1.7 million people are Christians, including 116,000 Catholics.

Fighting has also flared up in southeastern Karen state — another largely Christian region — and more than 24,000 Karen have been forced to flee their homes and hide in the jungle following military airstrikes in late March. At least 14 people have been killed and more than 40 wounded in airstrikes, according to Christian aid group Free Burma Rangers.

Myanmar’s junta has been battling rebels in ethnic areas including Karen and Kachin states while stepping up its deadly crackdown on peaceful pro-democracy protesters following the Feb. 1 coup.

“Horrified to learn that in addition to murdering at least 737 people and arresting well over 3,200, the junta’s attacks have already left nearly a quarter million Myanmar people displaced,” Andrews said on Twitter.

He said the world must act immediately to address this humanitarian catastrophe.

Myanmar’s junta has been facing strong pressure from the West over its intense crackdown on protesters, including sanctions on the military leadership and military-linked two companies by the US, Britain and the EU.