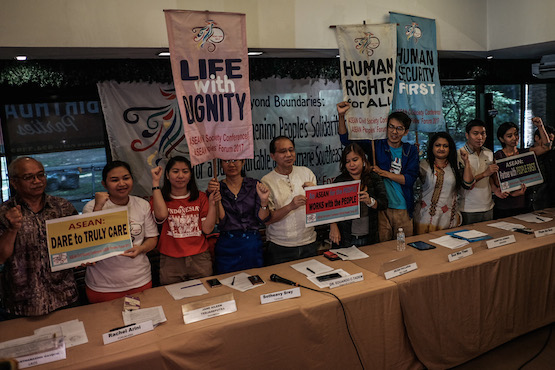 Leaders of civil society organizations in Southeast Asia call for the inclusion of people's issues at this year's ASEAN summit in Manila on Nov. 14. (Photo by Mark Saludes)

A conference of civil society organizations in Southeast Asia is demanding the inclusion of people’s issues in discussions at the Association of Southeast Asian Nations (ASEAN) summit this week.

In a parallel meeting in Manila, leaders of the ASEAN Civil Society Conference said governments alone cannot address the challenges being faced by the region.

He said ASEAN leaders and governments should break away form the "dominant concept of economic development" that only "produces economic, social, and environmental crises."

"What they do is talk how to do business but not address the most pressing issues of the marginalized sectors of the region," said Tadem.

Joyce Godio of the Asia Indigenous Peoples Pact said the exclusion of representatives of tribal people from the ASEAN summit is a denial of indigenous peoples' rights.

"Regional leaders must acknowledge the indigenous people’s way of protecting the environment and their concept of comprehensive progress," said Godio. Protests held outside US Embassy ahead of ASEAN summit in Manila

"The lives of Southeast Asians should be at the heart of the ASEAN meeting, not businesses," said Paclarin.

Sumitha Kishna, an activist from Malaysia, said the ASEAN summit is an opportunity to hear the region's leaders to hear the voices of workers.

She said global superpowers have encouraged "militaristic approaches and resolution" to conflict to address territorial disputes instead of preventing it.

Jane Aileen Tedjaseputra of Indonesia voiced the group's growing concern over human rights in the region.

She said ASEAN has a "toothless" human rights mechanism" and continues to ignore the universality and interdependence of human rights."

"In some ASEAN countries, governments are installing laws and committing acts that continue to destroy the enabling environment for civil society organizations and grassroots organizations and human rights defenders," read the group's statement.

The group noted that people escaping from conflict, such as the Rohingya, are "at the mercy of traffickers and horrendous treatment in countries of destination."