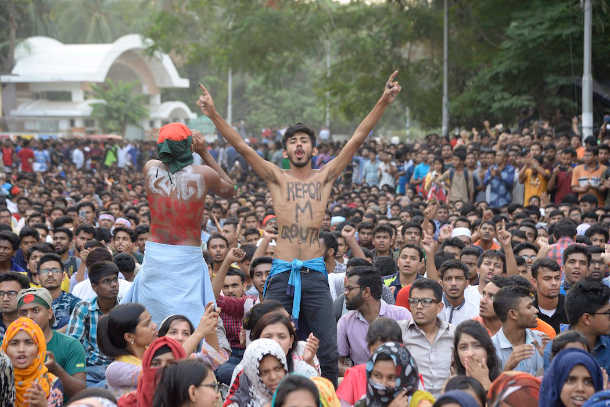 A prominent rights watchdog has accused Bangladesh's ruling government of human rights abuses and for diminishing basic freedoms in the South Asian nation.

"Bangladesh's human rights situation has alarmingly deteriorated over the past years, and it tends to get worse," Hong Kong-based Asian Human Rights Commission (AHRC) said in a statement on July 26.

AHRC put the blame at the feet of the ruling Awami League government, which it says is denying civic space for the Bangladeshi people.

"Exercising of basic freedoms by the ordinary people appears to be impossible under the current regime. Freedom of peaceful assembly and association is being denied and dealt with [cruelly]," said AHRC.

"Both the law enforcement agencies of the state and the ruling party's armed gangsters join each other to hit protesters in broad daylight."

The rights watchdog referred to recent incidents — a police crackdown on university students demanding reform to the government's job quota system, and an attack on a former editor of a newspaper linked to the opposition Bangladesh Nationalist party by student activists of the ruling party.

"Civilian administration, the judiciary, intelligence agencies, healthcare professionals and pro-government academics are complicit in this process of oppression," the statement read, adding that "the incumbent Prime Minister Sheikh Hasina wants to stay in office at any cost."

Theophil Nokrek, secretary of the Catholic Bishops' Justice and Peace Commission, said the AHRC statement sheds light on what is occurring in Bangladesh.

"Undoubtedly the human rights situation is worsening. Extrajudicial killings go unabated, while police crackdowns on protesters and the suppression of opposition are a few examples," Nokrek told ucanews.com.

"The government refused and abolished a neutral caretaker administration system during elections, and instead the election will be held under the ruling government."

"The current situation in Bangladesh is reflected in the AHRC statement," Khan told ucanews.com.

"We see people being abducted and killed in arbitrary arrests and shootouts, and the harassment of civic rights activists and political opposition with false cases and detentions.

"The government is adamant to hang onto power at any cost, even at the expense of people's rights to freedom of expression and associations."

But Shafiqul Islam, a ruling Awami League lawmaker from the northern Natore district, dismissed AHRC criticism as baseless and called it anti-government propaganda.

"The government has no intention to hang onto power and to curtail civic and political rights of people. I believe the human rights situation is better today than ever," Islam told ucanews.com.

"The government has the mandate to take necessary steps to keep law and order to ensure safety of citizens and development of the country. A section of people in and outside the country are envious of our success, so they are trying to tarnish the image of the government."