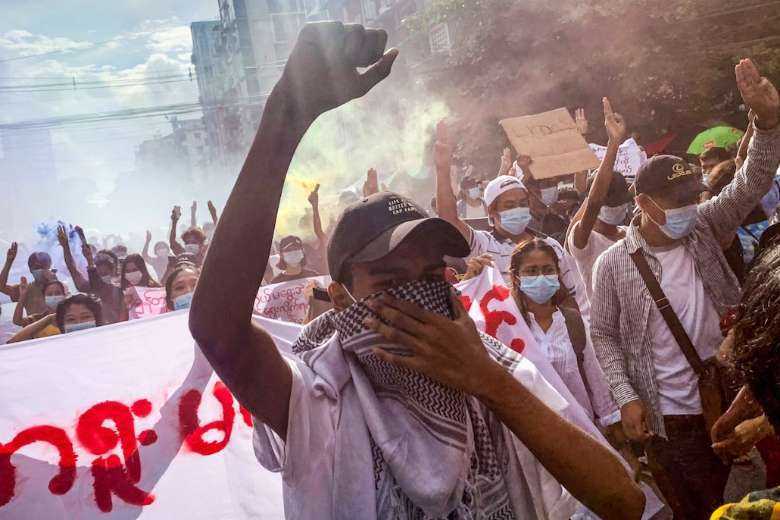 Protesters take part in a demonstration against Myanmar's military coup in Yangon on July 3. Myanmar has suffered a collapse in fundamental freedoms since the coup in February. (Photo by AFP)

Restrictions and attacks on activists and civil society have persisted across Asia, according to a new report released by the CIVICUS Monitor, an online research platform that rates and tracks fundamental freedoms in 197 countries and territories.

The report, “People Power Under Attack 2021,” released today, shows that out of 26 countries or territories in Asia, four — China, Laos, North Korea and Vietnam — are rated as closed. Eleven are rated as repressed and seven as obstructed. Civic space in Japan, Mongolia and South Korea is rated narrowed, while Taiwan remains the only country rated as open.

This means that the basic freedoms of speech, peaceful assembly and association are not being respected in most countries in this region. This decline marks a trend worldwide as data from the CIVICUS Monitor shows that 89 percent of the world’s population now live in closed, repressed or obstructed countries.

This year Singapore has been downgraded from obstructed to repressed as the government continues to use various tactics to silence dissent. A repressive “anti-fake news” law was used against government critics and independent media outlets. Journalists and bloggers also faced defamation charges with exorbitant fines imposed.

A vaguely worded contempt-of-court law has been used to prosecute Singapore activists for criticism of the courts under the guise of protecting the judicial system, while activists holding peaceful gatherings, including solo protesters, have been arrested or charged. Civil society has also raised concerns that a new Foreign Interference (Countermeasures) Act, passed in October, will further curtail civic space

“A staggering number of people in the Asia region are living in countries with closed or repressed civic space where their freedoms to speak up, organize or mobilize are severely restricted. Now Singapore, which claims to be a democracy, is joining this notorious list due to its array of restrictive laws used to stifle dissent, attacks on independent media, and a chilling new foreign interference law,” said Josef Benedict, Asia-Pacific civic space researcher at CIVICUS.

As authoritarian leaders in Asia seek to hold on to power, they have deployed restrictive laws to arrest and criminalize human rights defenders

In Asia, the top civic violation this year is the use of restrictive laws in 21 countries as governments use legislation to muzzle dissent. Human rights defenders were detained under such laws in at least 19 countries and in 11 countries they were prosecuted.

China continued to prosecute scores of human rights defenders under vaguely worded offenses, while in Hong Kong the draconian national security law has been weaponized to target dozens of activists.

In Vietnam, activists and bloggers are facing long sentences for “anti-state propaganda” and “abusing democratic freedoms,” while in Cambodia, “incitement” laws are systematically used to target dozens of activists.

National security and anti-terror laws were also systematically abused in India to detain activists, while criminal defamation laws were deployed to criminalize activists and critics including for lese majeste (royal defamation) in Thailand.

Such defamation legislation was also used in Malaysia against those who criticized politicians and in Bangladesh for online dissent.

Another major violation is the crackdown on demonstrations, with protesters detained in at least 14 countries.

In Myanmar, thousands of protesters were arbitrarily detained by the junta following the February military coup and some were even met with deadly force. In Thailand, the authorities disrupted pro-democracy protests, at times using excessive force including live ammunition.

In Indonesia, activists protesting the unilateral renewal of the Papua Special Autonomy Law were detained, while in Malaysia authorities attempted to stifle anti-government protests organized by the Peoples Solidarity Secretariat.

In India, the authorities vilified and repressed the farmers’ protest movement, while in Sri Lanka dozens of people were detained for protests against the militarization of higher education.

Other major violations documented in the Asia region include the harassment and intimidation of activists, including surveillance, smear campaigns, cyberattacks, torture, ill-treatment and the detention of journalists.

“As authoritarian leaders in Asia seek to hold on to power, they have deployed restrictive laws to arrest and criminalize human rights defenders. Scores of activists and journalists are behind bars, facing trumped-up charges, and some have been tortured and ill-treated,” said Benedict.

“Instead of listening to people’s demands, the authorities have also resorted to disrupting peaceful protests in numerous countries, at times under the guise of the pandemic, with excessive or deadly force. Despite these attacks, civil society groups have not relented and are finding new ways to push back and to demand their rights.”

Following the Taliban takeover in Afghanistan, protests — especially by women — were met with excessive force leading to deaths and injuries

Myanmar saw a rapid decline in fundamental freedoms following the coup with the crackdown on protests, arrest, detention and criminalization of hundreds of activists, targeting of journalists, as well as the torture and ill-treatment of political prisoners.

Following the Taliban takeover in Afghanistan, protests — especially by women — were met with excessive force leading to deaths and injuries, and there have been reports of intimidation and attacks on activists and journalists.

Despite these threats to civic freedoms, there has been some good news. Mongolia’s civic space rating has been upgraded from obstructed to narrowed. In April, the country adopted a new law for the protection of human rights defenders, making it the first country in Asia to provide a legal framework for their protection.

Other positive developments include progress in the campaign by activists to hold Philippine President Rodrigo Duterte accountable at the International Criminal Court, plus the decriminalization of same-sex relations in Bhutan.