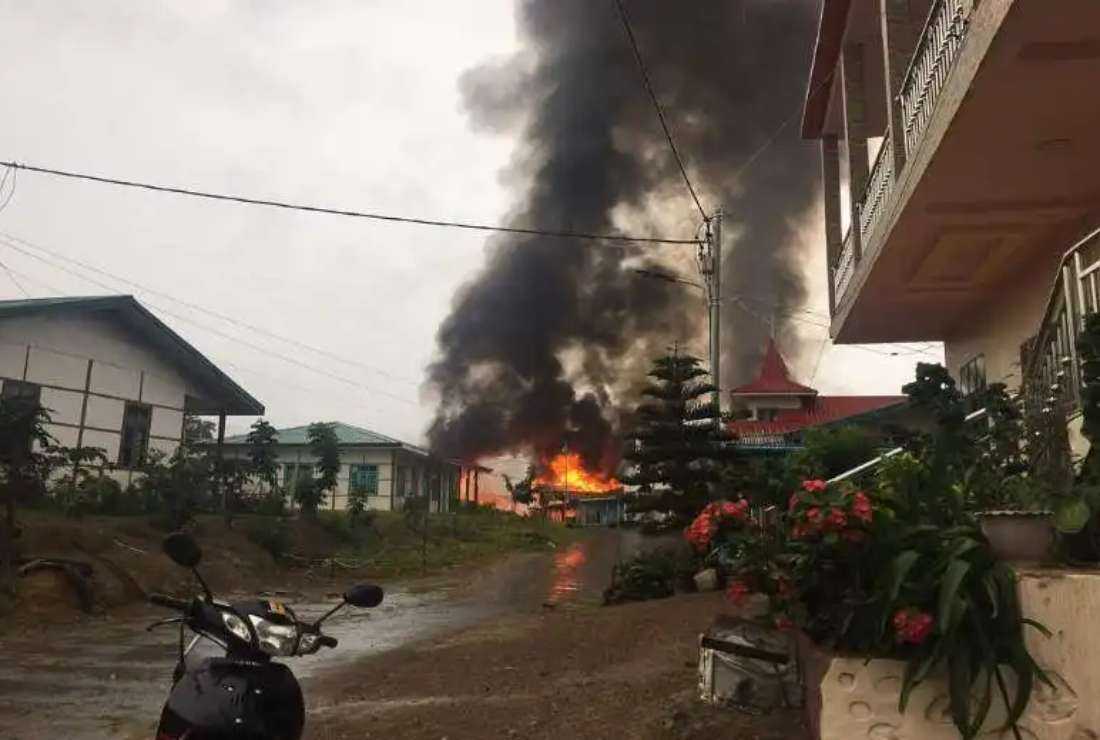 At least 18 homes and a government building were burned down in Chin state’s Thantlang township on Sept. 18 during a three-hour clash between the Chinland Defence Force and junta forces. (Photo: AFP)

Churches, hospitals, and schools in Myanmar’s Christian-majority Chin state are on the list of targets as the military junta plans to carry out major air strikes against ethnic rebels, a spokesperson for an armed rebel group claimed, referring to leaked military documents.

“We cannot reveal where we got this intelligence information, but we are preparing the best we can for the defense against this airstrike,” he said.

He claimed that the documents revealed that churches, hospitals, clinics, and schools are also on the list of possible targets.

A civilian leader said the news about the imminent attack has panicked local communities in Mount Victoria.

“We are the only village near that mountain,” he said. “If they also target the village, we could be hit hard.”

Thant Zin neither commented nor dismissed the claims made by CNF.

However, Thein Tun Oo, executive director of Thaenaga Institute for Strategic Studies, a pro-military think tank, said that the military only launches airstrikes “when absolutely necessary.”

“The position is the same for all armed organizations in the country. If they view something as detrimental for their security, they take military action. This is a very normal path,” he was quoted as saying by RFA.

“But I am suspicious that such an important decision to launch an airstrike has been leaked to the outside. It is hard to say whether their information is right or wrong.”

Violence has engulfed Myanmar since the military coup last year. The military’s ouster of the elected government of the National League for Democracy (NLD) has also reignited the long-running civil in ethnic states.

Christian-majority states such as Kachin, Kayah, Shan, and Chin states have witnessed fierce fighting between the military and rebels. Hundreds have been killed and thousands displaced due to the violence. The military offensive saw churches, church-run institutes, and civilian organizations attacked and destroyed.

In one of the worst attacks, the military forces bombed a concert in Kachin state last month, leaving 63 people killed. Most of the victims were members of the Kachin Independence Organization, an ethnic rebel group fighting for independence for decades.