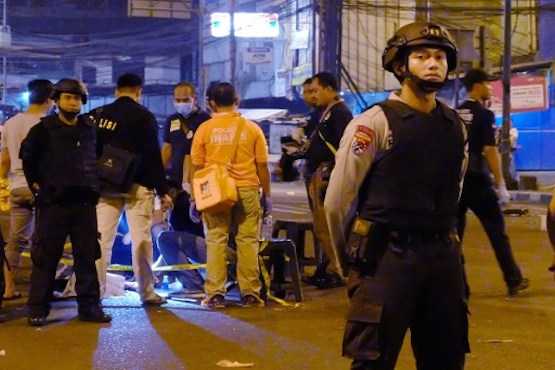 Indonesian police officers stand guard outside Kampung Melayu bus terminal in Jakarta as investigators check the scene of a suicide bomb blast on May 24, 2017. (Photo by Bay Ismoyo/AFP)

Christians in Indonesia were on high alert May 25 after two suicide bomb blasts near a bus terminal in the capital Jakarta killed three policemen.

"I think this is part of a global attack," police spokesperson Setyo Warsito told reporters on May 25.

The blasts came days after so-called Islamic State-linked groups claimed responsibility for a deadly bombing in Manchester, England and an attack in Marawi, a Muslim-majority city in Mindanao, southern Philippines.

Maria Magdalena, a Catholic from St. Joseph Church in East Jakarta, a few kilometers from the scene, said the bombings have terrified people in her neighborhood.

"There is a feeling of fear. We have to stay alert because we do not know when another attack will happen," she told ucanews.com.

Yohanes Bao Keraf, who heads the security desk at the church, said the parish is taking steps to secure the church.

"We are coordinating with police on heightened security measures," he said.

Catholics in the parish say they are well aware that they could be the next targets of Islamic extremists, since they have been targeted before.

Jamaah Islamiyah militants bombed St. Joseph Church, and several other churches in Jakarta and other cities, on Christmas Eve in 2000 killing 18.

Westerners have also been targeted with militants killing 202 people in Bali in 2002.

A more sinister threat has emerged over the past several years with the rise of the so-called Islamic State (IS) group.

Observers estimate up to 2 million people across the country harbor support for the IS, while several militant groups have pledged allegiance to it.

The government must ensure security at all worship places, not only churches but also mosques and worship places of other religions, he said.

"This bombing occurred when Muslims were holding a Ramadan parade," he said.

He also called on the government to ban Indonesian jihadists returning home after fighting with the Islamic State in Syria.

"We need an all out war against terrorism," the priest said.

Reverend Gomar Gultom, general secretary of the Communion of Churches in Indonesia, said the May 24 bomb blasts were the result of "government and security officials not taking significant action against extremism and hate speeches."

"The bombings aimed to create fear, and the government must overcome this by providing a sense of security," he said.

Police believe the suicide bombers were targeting dozens of policemen stationed at the terminal for the pre-Ramadan parade.

The fasting month of Ramadan begins in the world's most populous Muslim country on May 26.

Ridwan Habib, a defence and intelligence specialist from the University of Indonesia, said the attacks in East Jakarta on May 24 were similar to previous bombings such as the one on Jan. 14 last year in Solo, Central Java that also targeted policemen.

"They are targeting police officers because they are seen as their biggest threat, a stumbling block, to their mission," Habib told ucanews.com.

"They are looking to catch police off guard," he said.

This attack was planned, timed for when police began to relax after providing intensive security for the recent Jakarta governor elections, he said.

The country’s largest Muslim body, the Indonesian Ulema Council (MUI) condemned the attack, saying it went against the teaching of Islam.

"The perpetrators are definitely people who have no faith and belong to group that does not want Indonesia to live in peace and harmony."