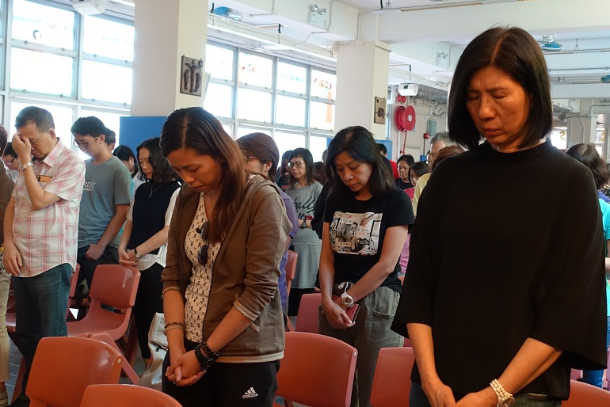 About 300 Catholics attend a bell-ringing prayer service on Sept. 1 at St. John the Baptist Church in Hong Kong to pray for an end to the violence that has dogged the territory in recent weeks. (ucanews.com photo)

Churches throughout Hong Kong rang their bells at 1 p.m. on Sept. 1 to pray amid continuing clashes between pro-democracy protesters and police.

A total of 44 churches participated in the campaign: 21 Catholic, 16 Anglican, five Methodist, one other Christian and the chapel of the Divinity School of Chung Chi College at the Chinese University of Hong Kong.

The bell-ringing prayer campaign was launched by Theresa Lee, a local Catholic, who hoped it would arouse people’s consciences and cheer for Hong Kong.

She told Kung Kao Pao, the Chinese diocesan weekly, on Aug. 15 that the conflict of the extradition law amendment had left her with a “deep concern” and she now realized this was a feeling shared by more and more people.

They included Joseph Chan, a Catholic in St. John the Baptist parish who participated in the bell-ringing prayer after Sunday Mass.

He said the city had been torn apart by great sadness in recent months, so he had prayed for those injured in public protests and hoped that constructive dialogue could restore peace in the Beijing-governed special administrative region.

His parish used a singing bowl to replace the bell — it is usual for Hong Kong churches to use such eastern musical instruments — and more than 300 faithful tearfully sang the hymn “Sing Hallelujah to the Lord.”

Chan believed that the bell-ringing campaign would demonstrate the churches’ ecumenical solidarity with all those caught up in the dispute.

“Although there are a lot of opinions in society, I think the Church should proclaim the message of peace through the teaching from Jesus,” he said.

Joe Chan, a parishioner of the Holy Cross Church, which also took part in the bell ringing, noted that many like-minded Catholics might not have been able to able to take part in other activities, “so this prayer can at least help them feel involved.”

“Many faithful are distressed, helpless or even angry,” Chan added. “They are always asking ‘When will this come to an end? What can we do?’ The parish is a reflection of society.”

He believed the Church should protect the wounded and oppressed “in accordance with Catholic teaching that guided the faithful to follow a way of justice and peace.”

The night before the prayer campaign, police arrested 40 citizens amid violent scenes and at least 10 people were injured on the platform of the Prince Edward subway station. On the same day police forbade a rally being held by the Civil Human Rights Front but many protesters still attended a different demonstration on Hong Kong Island.

Cardinal John Tong, 80, the apostolic administrator of Hong Kong, together with other religious leaders, urged officials to give Hong Kong a “cooling-off period” for two months.

The Colloquium of Six Religious Leaders of Hong Kong, which comprises representatives of the Catholic Church, Protestant Church, Buddhism, Taoism, Islam and Confucianism, announced on Aug. 30 that due to the ongoing conflict over the proposed extradition law amendment, the six religious leaders were urging the government and protesters to use the time to think and prepare for the common good.

See a ucanews.com video report below: