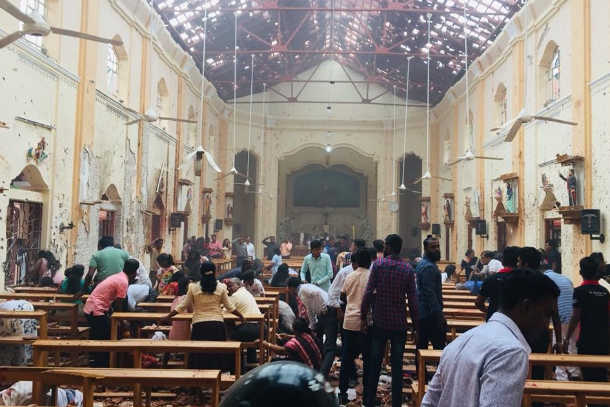 At least 290 people have been killed and hundreds more injured in eight explosions targeting churches and hotels in Sri Lanka.

Images posted on the Facebook page of St. Sebastian’s Church in Negombo, 37km north of the capital Colombo, show a heavily damaged interior of the church and members of the congregation scrambling to help the injured.

An appeal for help was also made by the church on Facebook.

“A bomb attack to our church please come and help if your family members are there,” the message said.

The images could not be immediately verified but Reuters reported a police official stating more than 50 people had been killed at St. Sebastian's alone.

Watch this video for more on the attack against St. Sebastian’s Church.

In Colombo, St. Anthony’s Church was targeted with reports of more than 160 injured.

Cardinal Malcolm Ranjith of Colombo said that nearly 150 Catholics were killed by the bombing of the two churches.

The cardinal said that it as "a very, very sad day for all of us."

"I [would] also like to ask the Government to hold a very impartial, strong inquiry and find out who is responsible behind this act and also to punish them mercilessly because only animals can behave like that," he said.

Another explosion targeted The Zion Church, 221 km east of the capital in Batticaloa. Latest reports said 25 people had been killed in that bombing.

The BBC has also reported that three hotels — the Shangri La, Cinnamon Grand and Kingsbury — were also hit. Thirty two foreigners are among the dead.

There were no immediate claims of responsibility.

According to the 2012 census, out of Sri Lanka's population of about 22 million, 70 percent are Buddhist, 12.6 percent Hindu, 9.7 percent Muslim and 7.6 percent Christian. Sri Lankan security personnel keep watch outside the church premises following a blast at the St. Anthony's Shrine in Kochchikade, Colombo on April 21. Explosions have hit three churches and three hotels in and around the Sri Lankan capital of Colombo, police said on April 21. (Photo by Ishara S. Kodikara/AFP)

This report first published April 21 was updated on April 22.