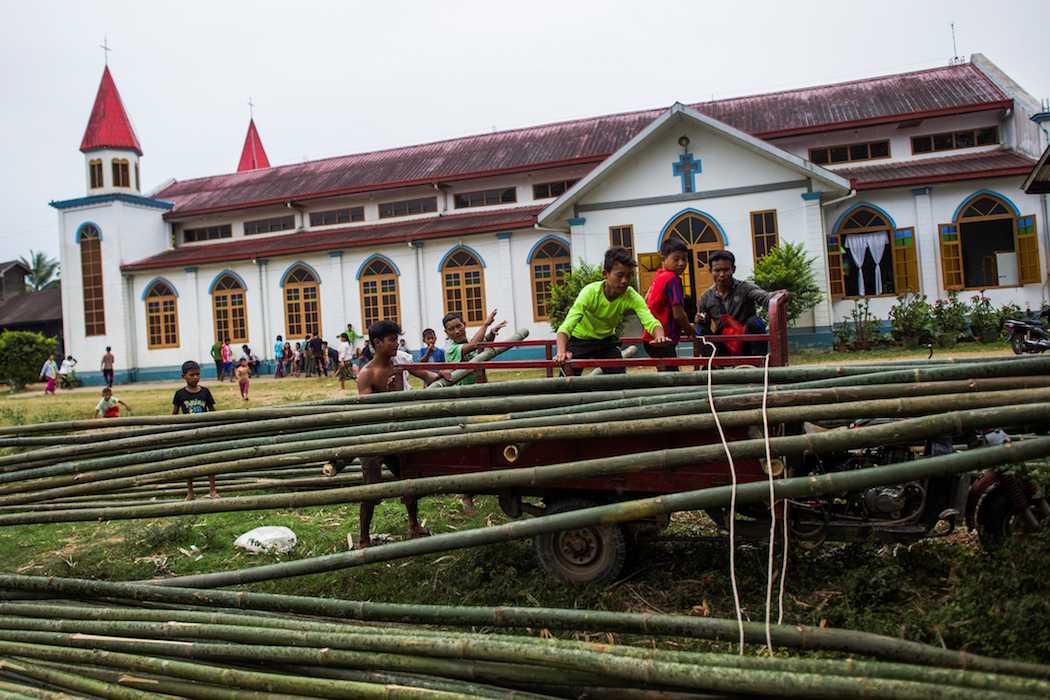 Internally displaced people, fleeing renewed fighting between Myanmar's army and ethnic insurgents in the country's remote north, arrange a load bamboo to build a temporary shelter at a church compound in Nanmati, Kachin State on May 12. (Photo by Ye Aung Thu/AFP)

The Myanmar military's ongoing offensive against rebels in northern Kachin State has resulted in thousands of people taking refuge in churches.

The military was being asked to allow their rescue, Father Awng Tu said.

The priest added that nearly 2,000 people had already taken refuge at Catholic churches in Myitkyina, Tanai, Tangphre and Namti townships.

And another group of about 200 people were being given shelter at a Catholic-run internally displaced persons' camp in Waimaw township, near Myitkyina.

"The situation is worrisome as more people flee their homes as a result of the military's major offensive in several townships in Kachin," Father Awng Tu told ucanews.com.

More than 600 people who had been trapped in jungle near the Tanai and amber and gold region since April 11 reached towns last week with help from church groups.

Kachin State is 90 percent Christian and has been beset by sporadic fighting for several decades. More than 100,000 people remain displaced in Kachin and neighboring Shan states after being driven from their homes since fighting resumed in 2011. Internally displaced people take temporary shelter at a church compound in Tanghpre village outside Myitkyina, capital of Kachin State on May 11. (Photo by Ye Aung Thu/AFP)

The government has pledged to bring an end to the decades-long conflict, but renewed clashes have undermined peace initiatives. The fighting has also raised questions about how much influence State Counselor Aung San Suu Kyi has over the military.

More than 8,000 people have been newly displaced in Kachin and Shan states since early April.

This includes more than 7,400 people in Kachin displaced due to fighting between the military and the KIA.

There have been reports that in northern Shan State more than 600 people have been displaced due to clashes between government forces and several ethnic armed groups.

Gum Sha Awng, spokesperson for the Joint Strategy Team alliance of nine humanitarian groups, said clashes continued on May 14 but he had no information about whether there were more civilian casualties.

The Ta'ang National Liberation Army (TNLA) and the KIA attacked Muse township's police force and the Namkham Myoma local militia at Pan Khan Bridge on May 12, leaving 19 people dead; 14 civilians and five local militiamen as well as a police officer, according to a state-media report.