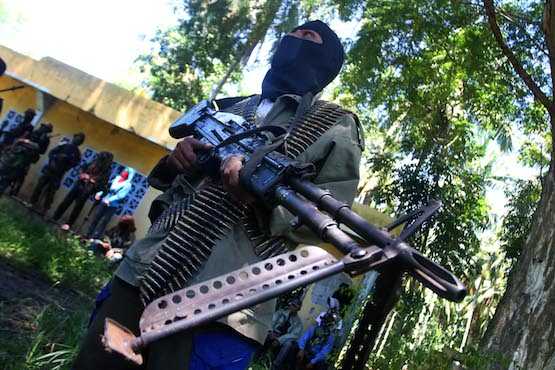 Fighters of an extremist group linked to the so-called Islamic State pose for a photograph somewhere in the southern Philippine region of Mindanao. (File photo by Mark Navales)

The move has already drawn flak as being an over reaction from many quarters, including church leaders.

The president placed all of Mindanao's 27 provinces and 33 cities, roughly a third of the country, under martial law for a period of 60 days.

Mindanao is home to an estimated 20 million people.

The martial law announcement came after dozens of fighters from the Maute terror group entered Marawi, a predominantly Muslim city of about 200,000 people, earlier on May 23.

The group, which has vowed allegiance to the Islamic State and has been clashing with security forces in recent months, took over a hospital, a Catholic cathedral, and a Christian school.

A hospital, the city's jail, and several other establishments were also taken over by the gunmen.

Initial reports received by ucanews.com said Father Teresito Suganob, vicar-general of the Prelature of Marawi, and several staff of St. Mary's Cathedral, which was set on fire, were taken hostage.

The United Church of Christ in the Philippines also reported that the main building, science laboratories, and library of Dansalan College, a Protestant school, were also set on fire.

Duterte cut short his visit to Moscow after he announced that "units of the Islamic State Group" occupied Marawi and a military operation was ongoing.

The president has repeatedly warned that he would declare martial law to quell security threats in the country, especially in Mindanao.

No need for martial law

Religious leaders and civil society groups, however, said there was no need for Duterte to put Mindanao under military rule.

"Putting the whole of Mindanao under martial law is very dangerous and vulnerable to abuse," said Alih Aiyub, secretary-general of the Ulama Council of the Philippines.

The Muslim religious leader told ucanews.com that "innocent people might be caught in the crossfire or might be arrested illegally by mere suspicion."

"Fighting terrorism does not need the declaration of martial law because our existing laws are more than enough to enforce it," said Aiyub.

Filipinos have been wary of martial law since it was used by former dictator Ferdinand Marcos to remain in power for two decades until his ouster in 1986.

Bishop Jose Collin Bagaforo of Kidapawan in Mindanao said the declaration of martial law could have been limited to Marawi City and surrounding areas "not all of Mindanao."

Redemptorist Father Amado Picardal, head of the Basic Ecclesial Communities of the bishops' conference, said declaring martial law across Mindanao while only Marawi was attacked "is either idiotic or an excuse to expand dictatorial control."

Activist groups said the declaration of martial law is not justified and will only invite more problems.

"Duterte is playing with fire if he thinks it is a solution to Philippine problems," said Jose Maria Sison, founding chairman of the Communist Party of the Philippines.

Sison, who was detained during Marcos' rule, warned Duterte not to be another dictator and use the present crisis in Marawi to justify military rule in the Philippines.

Human rights group Karapatan, meanwhile, called for "a deeper investigation" into the Marawi attack, saying that the martial law declaration is "an uncalled-for response."

Moro organization Suara Bangsamoro, meanwhile, appealed to the military not to conduct aerial bombings in Marawi to flush out the Maute fighters.

"We call on the Duterte administration to address the instability through talks and diplomatic means," said Jerome Succor Aba, Suara Bangsamoro chairman.

Suara Bangsamoro's Aba said the group aligned itself with the so-called Islamic State after members got "frustrated with the direction the Moro people's struggle for self-determination."

"The establishment of a new caliphate and a global Islamic State has become an inspiring goal to the group because of the government's insincerity in resolving the core problems of the Moro people," said Aba.