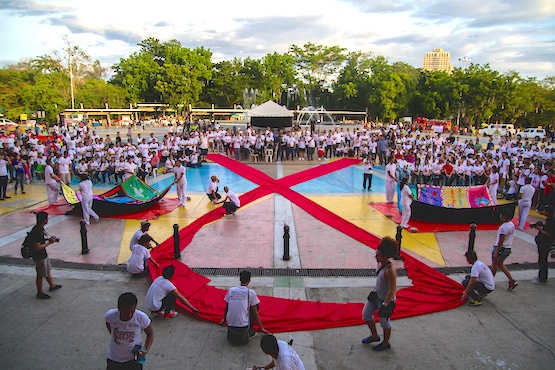 Civil society groups and health advocates light candles during the International AIDS Candlelight Memorial on May 14 in Quezon City. (Photo by Mark Saludes)

A top Philippine health official cited the important role the Catholic Church plays in fighting the spread of human immunodeficiency virus (HIV) in the country.

"Abstinence and a faith-based sexual attitude" is a helpful mechanism in preventing the spread of HIV and in mitigating its negative impact on society," said Doctor May Samonte, program manager of the Epidemiology Bureau of the Department of Health.

"The church can encourage young people to abstain from sex, teach people to be faithful to their partners and not engage in extra-marital sex," Samonte told ucanews.com in an interview on July 14.

She said only the church has the "moral integrity to say what is right and wrong.

"To remain loyal and devoted is a thing that the church can teach the public, something that the health department is unable to do," she said.

Samonte admitted that church leaders and health officials might not agree on some methods in preventing the spread of the virus, like the use of condoms, "but we recognize that the best prevention is faith-based behavior toward sex."

Father Dan Vicente Cancino, executive secretary of the Commission on Health of the Catholic bishops' conference, said the church has been active on its advocacy to promote HIV and AIDS prevention.

HIV attacks a person’s immune. AIDS or acquired immune deficiency syndrome is when the immune system is too weak to fight off many infections, and develops when the HIV infection is left untreated or is very advanced.

"The church has been there to physically help people living with HIV and AIDS," Father Cancino told ucanews.com.

He said the Philippine Catholic HIV/AIDS network, which has offices in different parts of the country, offers programs for people living with HIV/AIDS.

"We have support groups who provide treatment-care support to people with HIV and bring them to church-run hospitals and medical facilities," said Father Cancino.

He said "education and values formation" are also part of the church's apostolate for people living with HIV/AIDS.

The priest said the formation of conscience and the "realization of faith-based or value-based attitude toward sex" is the most powerful weapon in preventing the spread HIV/AIDS.

"We help the government in this fight through our wide network of health advocates and volunteers," said Father Cancino.

He said Basic Ecclesial Communities encourage people to undergo HIV testing and screening in their localities.

The priest said the church does not condemn a person with HIV but "extends our arms to provide treatment and care to whoever is in need."

Samonte said lack of understanding and wrong behavior toward sex cause the spread of the virus among Filipinos. She said only one in five Filipinos aged 15 to 24 years old have basic knowledge about HIV.

The health official said there is also a need to amend existing laws on HIV testing and screening.

"The government should allow minors to get tested even without written consent from the parents," she said.

"We are in fact in an emergency situation on HIV and AIDS," said Doctor Rossana Ditangco of the Research Institute for Tropical Medicine.

"At least 25 people are infected with HIV daily," said Ditangco, adding that the figure is likely higher because many people are not tested.

In May, there were 52 reported AIDS deaths. At least 1,759 people have died from the disease since it was first reported in the country in January 1984.