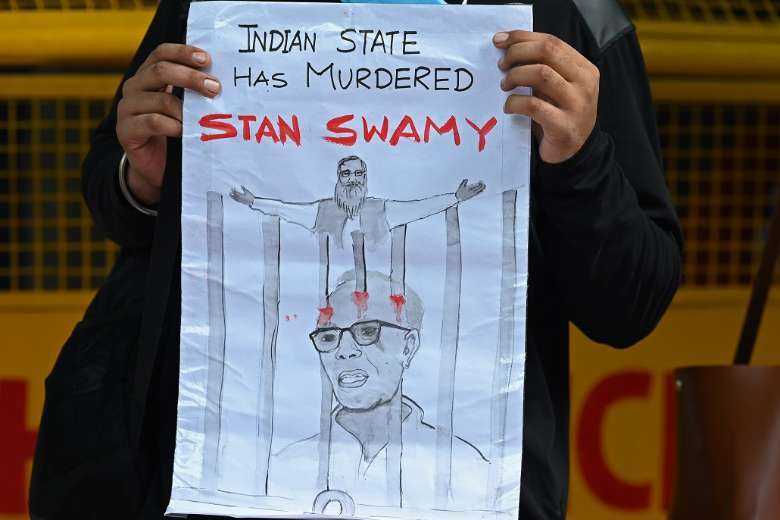 A student takes part in a protest in New Delhi on July 6, 2021, after Jesuit priest Father Stan Swamy, who was detained for nine months without trial under India’s sedition law, died on July 5. (Photo: AFP)

In a historic decision on May 11, the constitutional bench of the Supreme Court headed by Chief Justice N.V. Ramana directed the federal and state governments not to invoke Section 124A of the Penal Code until its constitutional validity is examined.

"We expect that until re-examination of this law is complete it will not be used," the bench said, ignoring opposition from the federal government.

Solicitor General Tushar Mehta, representing the federal government, did not want the court to stay the operation of the sedition law totally and instead wanted police to continue registering cases only if a police officer of the rank of superintendent of police found a valid reason.

The top court, however, disagreed with any such suggestion and stayed its operation across the country.

It also directed those behind the bars under the controversial law to approach competent courts for appropriate relief and bail.

The Editors Guild of India and Major General (Retired) S.G. Vombatkere challenged the sedition law on the plea that it has a “chilling effect” on free speech and is an unreasonable restriction on free expression, a fundamental right.

“This is huge. The citizens of India owe a big thank you to the judiciary,” A.C. Michael, senior office holder of the Alliance Defending Freedom, told UCA News.

“The Supreme Court’s move will certainly help protect civil liberties, human rights and the constitutionally cherished freedoms of the people of the country. This will benefit more than 13,000 Indians whose rights are suspended by a colonial law as all of them can now approach appropriate courts citing the present order for relief.

“This law has been repeatedly misused by all governments irrespective of the political parties that were/are in power. The only way to ensure the constitutionally guaranteed freedom of the people is to get rid of laws from colonial days which were especially framed to corner Indian freedom fighters by the British empire.”

Opposition parties and rights activists among others accused the federal government and many state governments of invoking the colonial sedition law to silence voices of dissent against the ruling dispensations.

Father Stan Swamy, an 84-year-old Jesuit priest who worked with indigenous people, was jailed under this controversial law.

The priest was remanded in judicial custody under trial on Oct. 9, 2020, a day after his arrest at his residence in Ranchi, capital of eastern Jharkhand state.

Father Swamy died on July 5, 2021, at a private hospital in Mumbai while undergoing treatment for Covid-19, Parkinson’s disease and other age-related illnesses.

He sought bail from the trial court and then Bombay High Court, but to no avail.

"Even constructive criticism is not tolerated and labeled sedition. As once said by the court, sedition cannot be invoked to minister to the wounded vanity of governments"

“Father Swamy and all implicated in the Bhima Koregaon case [in which one person died and several others were wounded in Maharashtra in January 2018] have been slapped by this draconian section of the Penal Code, thus even denying them bail for their treatment,” Father A. Santhanam, a Jesuit lawyer based in Tamil Nadu state, told UCA News.

“With the top court staying this provision, those put behind bars under this law are now entitled to bail without a second thought.

“The direction of the Supreme Court is welcome. It is to be noted that the sedition law has been exploited by ruling governments to suppress the voices of dissent. Even constructive criticism is not tolerated and labeled sedition. As once said by the court, sedition cannot be invoked to minister to the wounded vanity of governments.”

Father Santhanam urged rulers to respect dissenting voices and welcome healthy criticism in the interests of the nation.

British colonial rulers launched the sedition law in 1870 primarily to suppress the writings and speeches of prominent Indian freedom fighters.

However, successive governments continued to invoke the law, especially against Maoist rebels and other groups working against the interests of the country.

Its use, according to a database named “A decade of darkness,” has drastically increased since 2014 after Prime Minister Narendra Modi led the pro-Hindu Bharatiya Janata Party to power. More than 13,000 people were charged with sedition between 2010 and 2020.

The database recorded a 28 percent annual rise in sedition cases between 2014 and 2020 compared with the yearly average between 2010 and 2014 when the Congress-led United Progressive Alliance was in power.

UR RAJ
The rise is because of the present government's vigilance against those who are causing harm to the country. Your Stan Swamy was one of that, who not only threatened the country but lied to the people. More like him are likely to face the consequences similar to that. Whatever the Christians say, they have no rights to interfere in Indian affairs where the majority is Hindu. If you hate Hindus, it's your bad luck.
Reply