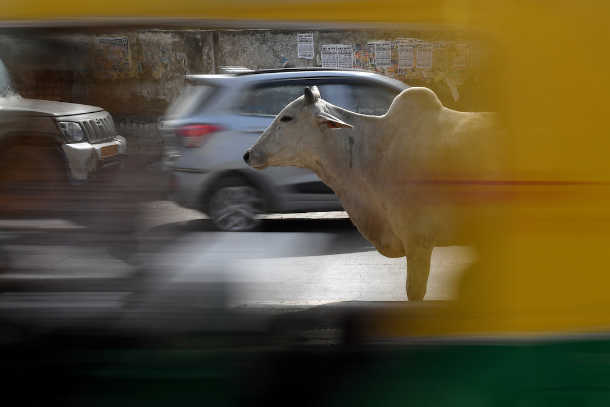 In this photograph taken on March 27 a stray cow stands near traffic on a road in Rewari in the Indian state of Haryana. (Photo by Money Sharma/AFP)

A Catholic archbishop has applauded an Indian state government’s plans for new punishments against vigilante-style violence, carried out to protect cows that are considered sacred by orthodox Hindus.

So-called cow protection groups have conducted a wave of lynchings across India in recent years mainly against religious minorities. The mainly Hindu nationalist mobs attack Muslims and others whom they suspect of storing beef or transporting cows for slaughter, a crime in most Indian states.

The government of central Madhya Pradesh state plans to amend a law allowing the jailing of those found guilty of such violence for up to five years and fines of up to 50,000 rupees (US$725).

The state cabinet approved on June 26 changes to the law, which currently does not include specific punishments for vigilante violence in the name of cow protection. Madhya Pradesh is governed by the secular Congress Party.

If passed by the state legislature it would become the first law in any Indian state to stipulate punishment for cow-related violence.

“The amendment is a right step as cow vigilantism has become a major worry, particularly among Christians and Muslims,” said Archbishop Leo Cornelio of Bhopal, based in the state capital.

Archbishop Cornelio said he hoped the penalties would act as a deterrent to the vigilante groups, whose violence was “a threat to freedom of life” for religious minorities in India.

“Their illegal and arbitrary actions” challenged the fundamental right of all groups in India to “freedom of thought, faith, religion, worship and expression, and, above all, the rule of law,” he said.

The new law comes after three people including a woman were tied to a tree and thrashed in Madhya Pradesh in May. Five people were arrested for the beatings, following public outrage over a video of the violence that spread on social media. The victims, a Muslim man and woman and their Hindu driver, had been suspected of transporting beef.

At least 44 people — including 36 Muslims — were killed in vigilante attacks between May 2015 and December 2018, the report released in February said.

Laws exist in 24 out of the 29 states restricting or banning cattle slaughter. These restrictions impact on Muslims and Dalits, many of whom work in the leather and livestock industries.

The Supreme Court last year called on the national government to enact new laws to help curb the problem.

But senior lawyer Govind Yadav said a lack of laws was not the issue, rather a lack of political will to implement them.

“The country has enough laws. The inability to implement laws actually leads to a situation like mob lynching in the name of cow protection,” he said. “If law breakers get political patronage, no amount of laws will help.”

"Why not act against all kinds of mob lynching? Why only against gau rakshaks (cow vigilante groups)? [Is this] because they are from the majority [Hindu] community?” BJP spokesperson Rajnish Agarwal said.