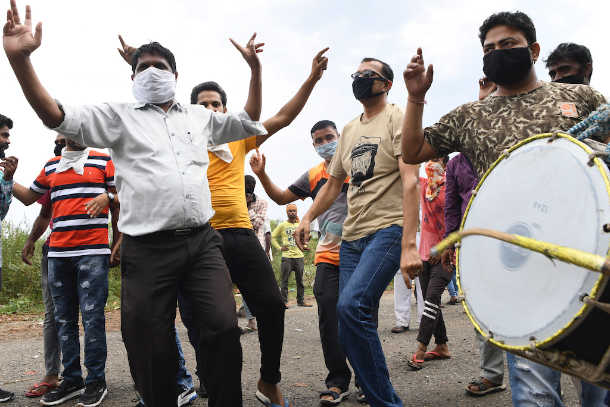 Migrant laborers from Uttar Pradesh in Punjab's Amritsar city celebrate on June 10 after the Supreme Court announced that all migrant workers will be allowed to travel to their hometowns within 15 days. (Photo: Narinder Nanu/AFP)

Church officials have welcomed India's Supreme Court directing the federal and state governments to help stranded migrant workers return home within a fortnight and to drop all criminal cases filed against them for violating lockdown norms.

An estimated half of India's 400 million migrant workers became stranded without jobs, transport and income after India imposed a nationwide lockdown from March 25 to check the spread of Covid-19.

"It is a very significant order, although it has come a bit late," Bishop Alex Vadakumthala, who heads the Indian bishops' office for labor, told UCA News on June 10.

Millions of migrants have walked thousands of kilometers back home and at least 100 have died on roads of exhaustion or in accidents. Millions are still stranded as public transport systems have not yet resumed despite the government relaxing lockdown norms.

The top court in the country on June 9 directed governments to transport stranded migrant workers from different states to their homes within 15 days.

"The stranded migrant workers faced unimaginable pain and suffering," said Bishop Vadakumthala of Kannur in the southern state of Kerala.

"The sudden imposition of the lockdown came as a bolt from the blue for the migrant workers and their families, who had to put up with hunger, disease and other hardships that one cannot imagine.

Media reports say that since March an estimated 30 million migrant workers have moved back to their villages by walking and using available transport such as trucks and limited special train services.

The court asked Indian Railways to provide more trains depending on demand.

The court also restrained cases from proceeding against migrant workers across the country. Police in several cities had filed cases against workers for defying lockdown norms by walking to their homes and for protesting on the streets demanding public transport.

The court also directed all state governments to rehabilitate migrant workers by ensuring jobs based on their skills once they returned to their homes.

Father Sahaya Philomin Raj, a lawyer and activist based in Madurai city, noted that these suo moto directions of the top court come "after its initial inhibition."

He said the court had earlier dismissed several petitions from right activists and social workers that sought court intervention to end the sad plight of migrant workers. The court then agreed with the law officer of the government that transporting migrants woul help to spread the virus to villages.

"The latest order will go a long way in resettling the migrants," the Jesuit priest told UCA News on June 10.

"The court has also shown its seriousness and its humane face once again by asking police chiefs in all states to deal with migrants compassionately. It has taken note of police excesses against migrants in the past."

Father Ajay Singh, a rights activist in Odisha state, said the court order would help thousands of migrants in states like Karnataka who were denied permission to travel back home on grounds that it could reduce the eastern state's workforce.

"Now no one can stop them from going back to their homes," Father Singh said.