Faithful urged to pray but expert dismisses threats as rhetoric 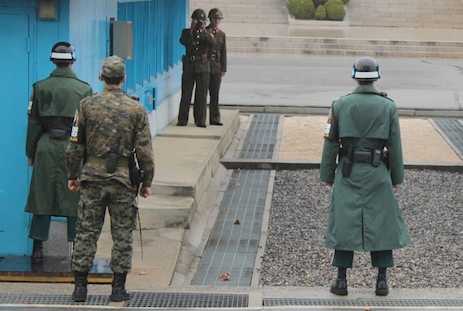 South and North Korean guards eye each other across the border (Photo: AFP)

Church officials are voicing growing concern about rising tensions on the Korean Peninsula and are urging people to pray for peace in the face of escalating war threats from the North.

“The situation is now urgent.  North and South Korea are strained to breaking point. We need to calm the situation down,” said Father Timothy Lee Eun-hyung, secretary of the Korean Bishops’ Committee for the Reconciliation of the Korean People.

He was speaking amid reports the North is preparing for a medium-range missile test.

“This year is the 60th anniversary of the Korean War [1950-1953] armistice which should be replaced with a peace treaty. However, we are now worrying about another war,” he told ucanews.com yesterday.

“Now is the time for prayers for peace. War will lead toward the destruction of the two Koreas,” he added.

The 1953 armistice ended the fighting in the Korean War, but left the two Koreas still technically at war. At present, more than one million troops are facing each other across the demilitarized zone buffer zone that separates the two countries.

However, tensions and rhetoric have increased since the UN imposed further sanctions on the North following its third nuclear test in February. North Korea reacted by scrapping the 1953 truce and has threatened nuclear strikes against the US and South Korea.

Analysts believe however, the latest threats are yet another attempt by the North to win concessions from the international community.

Professor Paul Yoo Ho-yeol, an expert on the North from Korea University, said the threats are an attempt by the North to maintenance its nuclear arsenal and to have international sanctions dropped.

“North Korea is using the same old tactic of issuing threats to get what it wants,” he said today.

“It knows that another war will mean the collapse of the regime,” he added.