Sikh volunteers prepare food for people in need during a government-imposed nationwide lockdown as a preventive measure against the coronavirus in Amritsar on March 31. (Photo: Narinder Nanu/AFP)

As India’s Punjab state struggles with a possible super spread of coronavirus, a church group in the Sikh-majority state has offered its institutions to use for emergency healthcare.

Bishop Angelo Gracias, the apostolic administrator of Jalandhar Diocese, which covers most of the state, wrote to Chief Minister Amrinder Singh expressing willingness to open diocesan schools and other institutions for helping Covid-19 patients.

All 140 Catholics schools in the diocese can be converted into quarantine homes for Covid-19 patients. Other diocesan institutions are also available for the state’s use in case of emergency, the letter said.

The offer comes amid fears of community spread of the viral disease after a Sikh religious preacher, who died of Covid-19, is suspected to have infected thousands of people in some 20 villages.

“You must be very much concerned about the spread of coronavirus,” Bishop Gracias wrote in his March 27 letter to Singh. “We share your concerns."

Jalandhar Diocese is “prepared to make available our institutions to serve as isolation camps” for Covid-19 patients, the letter said.

The diocese is ready to open its other institutions for the public cause if the government desires. “This is a time we need to fight against the global pandemic together," the priest said.

Bishop Gracias has also directed all parish priests to provide food and other help to migrant laborers in their areas who have lost work or been stranded after India began a 21-day lockdown that runs until April 14.

“If there is a request for groceries, we direct the person to a specified shop, and the diocese will foot the bill,” he said. 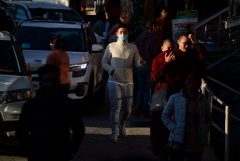 Father Thazathuveettil said the curfew will help to contain the spread of the virus in areas where people live close to each other in villages.

Punjab has quarantined some 40,000 people in over 20 villages after Sikh preacher Baldev Singh visited these villages for prayer programs while he was a Covid-19 patient.

After the 70-year-old guru died on March 18, a medical examination confirmed that he died of Covid-19. His death came 11 days after he returned from Europe via virus-stricken Italy.

Officials say the state is unable to trace the details of some 90,000 non-resident Indians of Punjabi origin who visited the state between the end of January until the lockdown started.

“The government fears they could also be possible carriers and hence the worries,” said an official on condition of anonymity.

Sikhs comprise 60 percent of Punjab’s 27 million people, while Christians are barely 2 percent of the population.