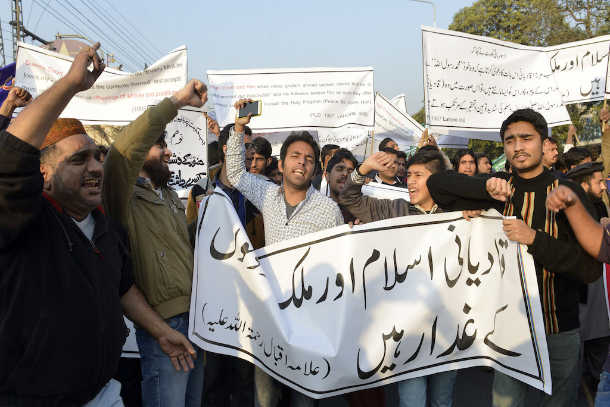 Pakistani traders shout slogans during a protest in Lahore in December 2015 against the arrest of a shopkeeper charged with blasphemy after he banned members of the Ahmadi minority from entering his shop — a rare bid by authorities to protect an ethnic group that usually suffers state-sanctioned persecution. (Photo by Arif Ali/AFP)

The Catholic Church in Pakistan has called on the nation's new government to help minorities amid criticism of the dumping of a talented Ahmadi economist from a senior advisory position.

The nomination of Atif Mian, an Ahmadi, to join the country's 18-member economic advisory council was withdrawn amid opposition from some mainstream Muslims. Ahmadis are a minority Islamic group not accepted by all Muslims.

The National Commission for Justice and Peace (NCJP), the Catholic Church's human rights body in Pakistan, congratulated new Prime Minister Imran Khan and President-elect Arif Alvi on their appointments in a media statement on Sept 6.

"Besides seeking development and progress of the nation, the government should also prioritize the issues of minorities so that they are integrated well in society and feel proud to be responsible Pakistanis," Archbishop Joseph Arshad of Islamabad-Rawalpindi, NCJP national director Father Emmanuel Yousaf and executive director Cecil Shane Chaudhry said in a joint statement.

The commission also stressed a need for the government to establish a Ministry for Minority Affairs at both provincial and federal levels while giving due representation to minorities in all ministries.

The church also called for a national commission to protect the rights of religious minorities. The government belongs as much to minorities as it does to the majority, the statement added.

Archbishop Arshad expressed "prayerful best wishes" for the new government. He said all parties should strive to improve life for weak and marginalized communities as well as steering youth and the nation toward peaceful coexistence.

The Pakistan Tehreek-e-Insaf political party of Imran Khan dropped the appointment of Mian, a professor at Princeton University in the United States.

Minister of Information Fawad Chaudhry tweeted that it would be inappropriate if a single nomination was divisive.

However, the minister had previously said the government would not "bow to extremists" opposed to the appointment.

In 2014, the Supreme Court of Pakistan mandated a quota system, with 5 percent of government jobs set aside for religious minorities. However, the rule is rarely enforced.

Sabir Michael, a research scholar and professor in Karachi University's social work department, expressed disappointment over the handling of Mian's appointment. "Mian was the highest qualified person in the economic advisory council," he noted.

And, for the first time, members of religious minorities have not been included in the federal or Punjab and Khyber Pakhtunkhwa provincial cabinets, he said.

"We don't have much hope for change," Michael told ucanews.com. "Perhaps church leaders should meet the PM and president in person and share their concerns. "We are not seeing justice being done."