Relatives of victims, survivors are 'six to seven times more likely to attempt suicide than the general population' 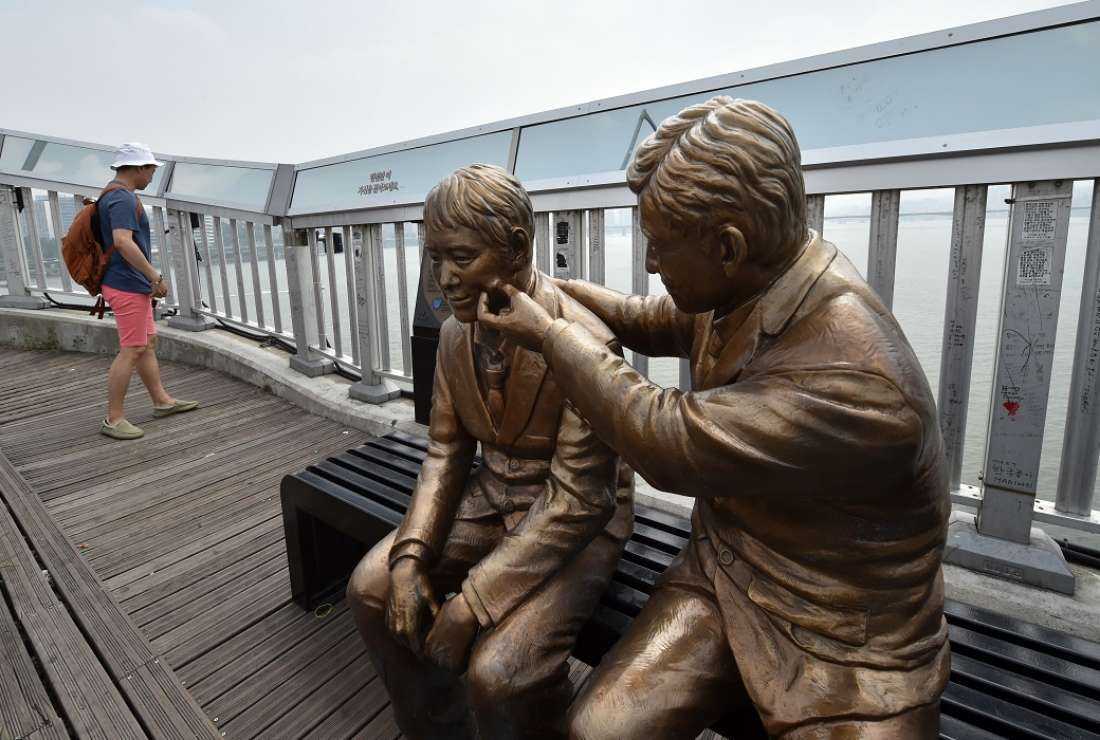 In this file photo, a statue of a man comforting a person is placed to dissuade suicides on Mapo Bridge, a common site for suicides, over the Han river in Seoul on July 14, 2014.

An official from a Church-sponsored pro-life organization in South Korea has called on the government and civil society groups to reach out to family members of suicide victims as the nation continues to grapple with a rising number of cases.

Father Cha Bauna, director of the One Body One Spirit (OBOS) Suicide Prevention Center, based in the capital Seoul, emphasized the need to pay particular attention to those left behind so that there are no further tragedies.

“Suicides are socially taboo and thus their families are marginalized. If such people were pushed out of the Church and society, there would be nowhere else in the world for them to go. As neighbors, we must find ways to prevent such things from happening in the future. That is what the Church community should do,” the priest noted.

The figure is the highest among 37 developed nations listed by Organization for Economic Cooperation and Development (OECD). South Korea’s suicide figure is more than double the average of 11 cases per 100,000 of the population among OECD-listed nations.

The Korean government has also analyzed factors behind suicides based on data from 801 suicide victims and their families over the past seven years.

Among the most common causes were a breakdown in family relationships, economic downturns, loss of jobs, poverty, and social isolation. About 9 in 10 victims had psychological disorders.

In over 83 percent of cases, bereaved relatives experienced a deterioration in their psychological state including depression. About 6 out of 10 respondents said they would choose death after a family member or friend committed suicide.

The Korean government has implemented a five-yearly Mental Health Program since 2004, particularly aiming to prevent suicides by combing state and non-state efforts.

Founded in 2004, the Korean Association for Suicide Prevention (KSAP), is a leading non-government organization, that promotes mental health and suicide prevention through education, awareness, and support for research and policy development.

The group, however, says that support for mental health is still inadequate, adding that mental health and suicides are still stigmatized topics, which need to be “treated carefully.”

This came after media reported that the province recorded the highest suicide rate in the country with 35 cases per 100,000 deaths, 8% higher than the national average. Lonely deaths shot up to over 1,000 in 2019 from around 60 in 2011, according to South Korea's Health and Welfare Ministry.

For example, the OBOS Suicide Prevention Center provides a place for self-help through gatherings for bereaved families, monthly masses, and retreats for two days and one night.

In June this year, it launched a campaign of prayer and rosary distribution as part of efforts to tackle rising rates of depression and suicide.

Another church-based group, Myeongrangchon (Myeongrang Village), has been running “Life Safety Net” programs and activities that convey the hope of life by caring for residents and neighbors, since 2012.

The group has trained over 540 volunteers to offer services that include free hugs, love life advice, family visit programs, suicide prevention and life-loving campaigns through public-private partnerships and networking.