With over 269 dead and millions marooned, Caritas looking to help most needy 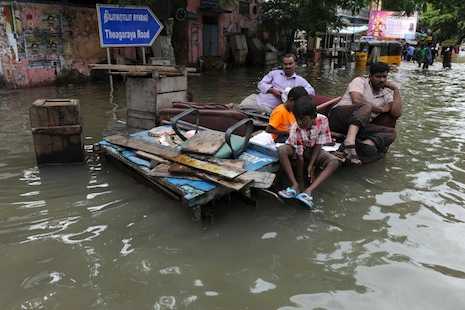 Caritas is rushing to aid people in Chennai, where rains and floodwaters have marooned most of the southern Indian city, killing hundreds and displacing millions.

This led to the immediate overflowing of reservoirs and the city's Adyar river, submerging homes, roads, rail lines and the airport, and cutting off most of the city's 6.5 million people from the rest of India.

"It is terrifying to see waters touching three floors in some areas. It was like a tsunami from the skies," Subramaniam Sundaram, a college professor in the city told ucanews.com.

Binek Krishna, a student rescue volunteer, added that now only boats can be used in city roads.

The federal government has declared Chennai "a disaster area" and pressed into service rescue teams from police, armed forces and the National Disaster Response Force.

Local residents have formed their own rescue teams and fishermen plied their boats to rescue people. Some 479 relief camps, mostly marriage halls, schools and colleges have been set up to help the displaced.

Churches, mosques, malls and cinema theaters also have opened their facilities to help and shelter them.

While media reported 269 people died due to the flooding, "the actual toll would be much higher" as people in adjoining districts also are affected, John Arokiaraj, Caritas India officer responsible for Tamil Nadu, told ucanews.com.

"The entire city is underwater. We are sure several deaths have gone unreported. It will take a lot of time to understand the actual death toll and cost of damage," said the volunteer coordinating the church's relief work in the area.

"Our effort will be to bring basic support to the neediest of families who may be sheltered in school buildings and other government-managed camps," said Father Frederick D'Souza, Caritas India executive director.

Caritas is looking to help some 4,000 families in such camps with local diocesan partners prioritizing dalit and other marginalized groups, Arokiaraj said.

Caritas is also coordinating with state and other agencies to avoid duplication and ensure efficiency, he added.

Local parishes, Christian communities and institutions are also doing what they can to shelter and help the affected people, he said.

Media reports quoted meteorological officials saying that the city received double the normal rainfall of the season in two days with some areas experiencing 50 centimeters of rain on a single day.

"No city can be prepared for such heavy rainfall and a 350-year-old city like Chennai, which developed without any planning, definitely cannot face such a tragedy," Raja Raman, a local resident told ucanews.com.

While the city copes with the disaster, environmentalists are pointing to global warming, the El Nino effect and poor local infrastructure in exacerbating the disaster.