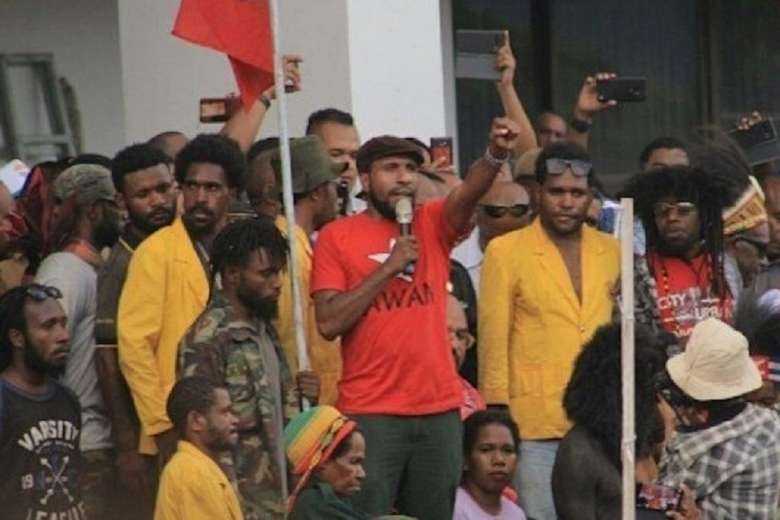 Victor Yeimo (red shirt) delivers a speech during a protest in Papua in 2020. Church and rights groups have called for his release following his arrest on May 9. (Photo: Victor Yeimo’s Facebook)

Dozens of church and rights groups in Indonesia have called for the immediate release of Victor Yeimo, a pro-independence leader detained by police in Papua earlier this month.

At least 32 church and rights groups, including the Franciscan Justice, Peace and Integrity of Creation (JPIC OFM), the Indonesian Christian Church in Tanah Papua and Amnesty International Indonesia, issued a joint statement on May 18 calling for his release.

“We call on the government to free Victor Yeimo immediately and unconditionally,” they said.

Yeimo, 37, general secretary of the West Papuan National Committee, was arrested on May 9 in the provincial capital Jayapura and charged with treason for allegedly masterminding anti-racism riots in August 2019 in cities across the province. More than 30 people were killed and many public buildings damaged.

The violence followed the arrest of a group of Papuan students in Surabaya, East Java, who were racially abused by people who had accused them of desecrating an Indonesian flag.

The groups said Yeimo’s detention and the charges laid against him were politically motivated and that the government had an obligation to uphold human rights.

If Indonesia still claims to be a democratic country and respects human rights, free Victor Yeimo

They also said the Indonesian government should be able to distinguish between an armed Papuan pro-independence group and someone expressing political views peacefully and who should be protected.

Indonesian security officers have committed human rights abuses against the Papuan people under the guise of fighting separatists, they said.

“Yeimo’s arrest will worsen the situation in Papua. We must settle the Papuan problem through dialogue,” said the priest, who is also coordinator of the Papua Peace Network.