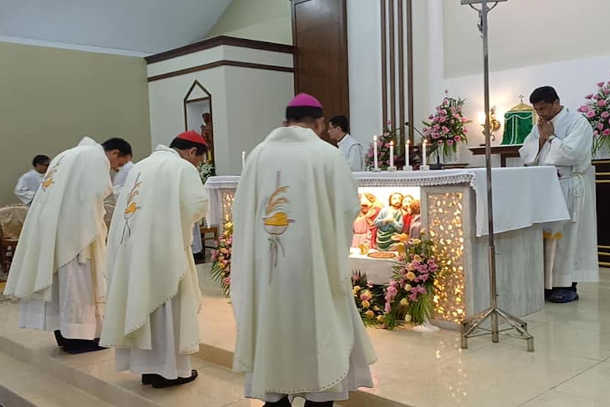 Church officials have joined Myanmar’s battle against Covid-19 by offering church properties including seminaries to be used as quarantine centers.

A national coordination team established on March 30 and led by Cardinal Charles Bo urged local bishops to prepare quarantine centers and carry out prevention and awareness campaigns through their diocesan response teams.

The national team has called on Catholics to join local authorities and church teams in the prevention, control and treatment of the pandemic by contributing donations, serving as volunteers and saying prayers.

As an initial step, St. Joseph’s Catholic Major Seminary in Yangon has been prepared to accommodate 130 people, while a 300-bed quarantine center will be prepared on church-owned land in Thanlyin, a port town near Yangon.

A building owned by the Catholic Religious Conference of Myanmar, opposite Yangon’s general hospital, has been offered to accommodate nurses and doctors.

In Mandalay Archdiocese, four church properties including two seminaries have been prepared for use as quarantine centers, while Pyay Diocese has designated a minor seminary.

In Banmaw Diocese in conflict-torn Kachin state, a church-run vocational training center has been transformed into a quarantine facility for 30 people.

He said Caritas Myanmar has also played a greater role in providing prevention aids such as face masks, hand sanitizer and soap to villages and IDP camps along with awareness campaigns.

“The Church has pledged to contribute its involvement as a wider response through Caritas and the national team,” Bishop Gam of Banmaw Diocese in Kachin state told UCA News.

The National Catholic Youth Commission has called on Catholic youths to serve as volunteers in the Church’s response to the coronavirus.

More than 7,000 quarantine facilities have been established in the country and there were 38,964 people in those centers as of April 22, according to the Ministry of Health and Sports.

State Counselor Aung San Suu Kyi announced through her Facebook page on April 23 that the rules and directives issued by the national central committee on prevention, control and treatment of Covid-19 have been extended from April 30 to May 15.

“The first Covid-19 wave is still with us. Just as it is impossible to know how high the wave is going to be, we still don’t know when the wave will subside. We have to hope for the best and prepare for the worst,” Suu Kyi said.

On April 23, Yangon regional government announced that the 10pm-4am curfew in 45 townships of the region would remain effective until June 18.

Other states and regions such as Naypyitaw, Mandalay, Shan and Karen have also imposed curfews which will remain effective until further notice.

Myanmar has reported 139 confirmed Covid-19 cases including five deaths, according to the latest data.