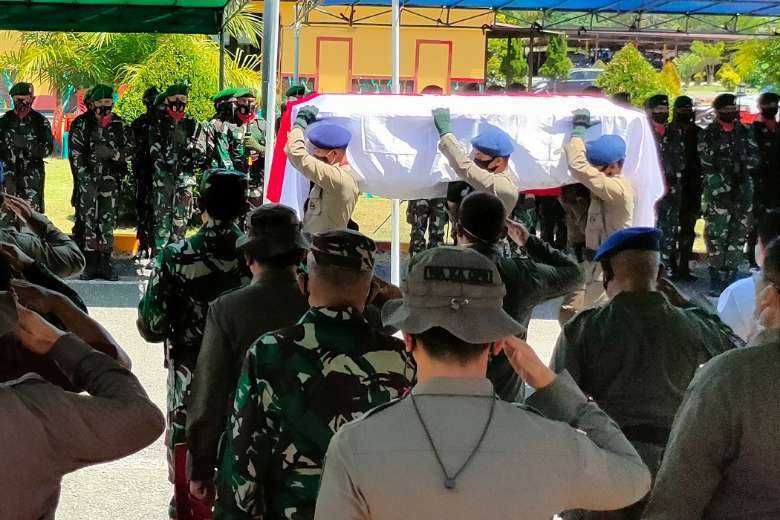 Police pallbearers carry the coffin of one of their officers in Mimika on April 28 after he was killed in a gun battle in Indonesia's restive Papua region between police and separatist rebels. (Photo: Saldi Hermanto/AFP)

A senior Catholic official in Papua has called on Indonesia’s military and rebel leaders to declare a ceasefire and prevent an escalation in violence and wider conflict following the government’s decision to designate separatists as terrorists last week.

The government's move to declare the West Papua National Liberation Army and the Free Papua Movement (TPNPB-OPM) as terrorists on April 29 followed the killing of the Papua Intelligence Agency chief by separatist rebels.

Observers and church people fear the move could spark an upsurge in violence in Indonesia’s restive easternmost region that has seen a low-level insurgency against Indonesian rule for the past few decades.

Father Marthen Kuayo, apostolic administrator of Timika Diocese, called for calm in a May 1 statement.

“We, the leaders of the Catholic Church in Timika Diocese, are deeply concerned about the recent violence and the response that have raised tensions here in Papua over the last few weeks,” he said.

He said the first to suffer would be civilians who often end up innocent victims in clashes between rebels and security forces, adding they are often forced to flee their homes or even killed as a result.

He called on both the military and separatist leaders “to show restraint and observe a ceasefire in order to find a dignified, humane, open and respectful solution together.”

He also condemned the government’s move to designate separatists as terrorists, calling it an unproductive action that could undermine efforts by religious leaders to forge peace in the region.

Similar sentiments came from the Communion of Churches in Indonesia,

The government’s security approach has so far failed to deal with issues in the region and “only created hatred among the people,” its spokesman Philip Situmorang said at the weekend.

“The government has to realize that peaceful solutions are the right ones for Papua,” he said.