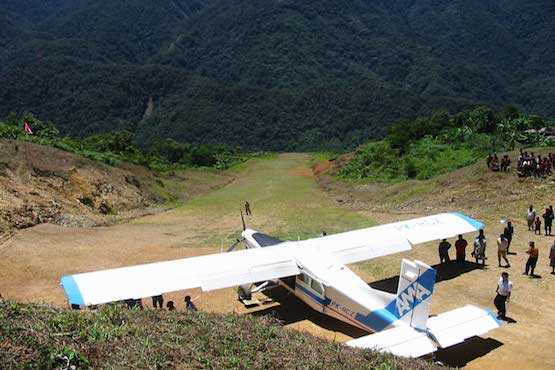 A Pilatus Porter aircraft like the one that crashed in Papua last week, prepares to take off from a remote airfield. (Photo supplied)

Catholics in Papua are mourning the deaths of five people killed when a church-owned plane crashed last week during bad weather while on a pastoral mission.

The Pilatus Porter aircraft owned by Associated Mission Aviation (AMA) crashed a few minutes after take-off on July 5 in the mountains in Papua's Wamena district, Papua, killing the pilot, co-pilot and three passengers.

Aside from the three passengers, the plane was carrying supplies for people in Darakma, a village in the mountains.

"This is indeed a big loss for the Catholic Church in Papua," said Bishop Leo Laba Ladjar of Jayapura.

"We are mourning the death of five good people," the Franciscan bishop told ucanews.com July 7.

AMA is a church-run air service under Papua's bishops that transports church workers conducting pastoral care and relief work to and from remote locations in the region.

It's fleet of nine light aircraft also acts as an airline for people seeking access to and from these isolated areas, many of which are inaccessible by road.

Bishop John Philip Saklil of Timika serves as its chairman.

Investigators are still trying to determine the exact cause of the crash.

Djarot Soetanto, director of AMA Papua, said the pilot of the doomed aircraft, Dutch national Wouter Moulders, 57, was an experienced pilot who had been flying for AMA for eight years and knew the rugged Papau terrain well.

John Gobay, one of tribal leaders in Mepago region in Papua said he hoped the tragedy "would not seriously affect pastoral and transport services for local people by the Catholic Church."

Ivan Ahmad Riski Titus, who headed the search and rescue team, said all the bodies had recovered.