Life is 'a gift from God' and should be protected, says bishop as death sentence is introduced for most heinous crimes 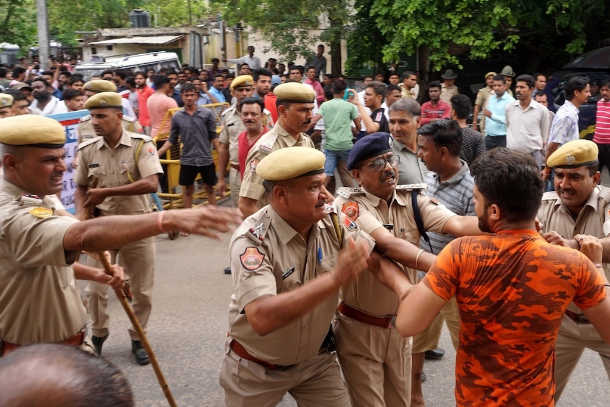 Police clash with people protesting the rape of an underage girl in Jaipur on July 2. Changes to Indian law now allow the courts to impose stricter punishments, even the death penalty, for sexual crimes against underage girls. (IANS photo)

Catholic leaders say the Church cannot support the Indian government’s decision to amend its child protection law and include the option of imposing the death sentence for child sex offenders.

The federal cabinet headed by Prime Minister Narendra Modi on July 10 approved amendments to the Protection of Children from Sexual Offences (POCSO) legislation that will allow courts to hand down stricter sentences for a range of child sex offences.

The amendments, described by the cabinet as an “historic decision,” are aimed at deterring “the trend of child sexual abuse” and to ensure the “safety and dignity” of children. It also “aimed to establish clarity regarding the aspects of child abuse and punishment,” the official statement said.

The gender-neutral POCSO Act 2012 sought to protect children below the age of 12 from all sexual crimes and to ensure their healthy physical, emotional, intellectual and social development.

The latest move follows India’s introduction of a criminal law in July 2018 allowing for the death penalty for rapes against girls under 12 in a bid to curb increased sexual violence against young girls across the country.

That law replaced an emergency amendment made to the criminal law in April 2018 following the national outcry over the rape and murder three months earlier of an 8-year-old girl in Kashmir and other such cases.

The latest amendments aim to make these laws compatible with each other irrespective of gender, legal experts said.

However, the Catholic Church is against the death penalty for any crime, said Bishop Jose Chittooparampil of Rajkot in the western state of Gujarat.

“The Catholic Church’s official stand is pro-life, considering life as a gift from God,” he told ucanews.com.  “It cannot back executions because God is the master of life. The Church believes in the transformation of even hard-core criminals.”

That should not be interpreted as meaning that the Church in any way supported or approved of heinous crimes such as the rape of underage girls or any other forms of violence, he said.

“There should be stringent punishments for those playing with the life of innocent children in all forms of sexual offenses so as to generate fear among those committing such offenses,” Bishop Chittooparampil added.

Father Maria Stephan, public relations officer of the Catholic Church in the central state of Madhya Pradesh, said the duty of the state “is not to take away life but protect it.”

Even serial offenders can be reformed through psychiatric counseling and other corrective methods. “Taking life is easy but bringing back the offenders to normal life should be our main concern,” he said.

A sexual offense could be committed out of a sudden impulse and there are many instances of young people regretting such actions. “Should we not give them a chance to live?” he asked.

Holy Spirit Sister Lizy Thomas, however, said: “Rape is a cruel crime, and especially horrible when it is committed against a minor.”

Many men commit the offense under the influence of drugs and without realizing the enormity of their crime, said Sister Thomas. “The punishment should be severe and long enough to help them understand their mistake and come back to normal life,” she added.

More than 50 children are raped every day in India, according to official crime data released by the National Crime Records Bureau.