An initiative of Kohima Diocese, the Nagaland center will be run by the Medical Sisters of St Joseph from Kerala 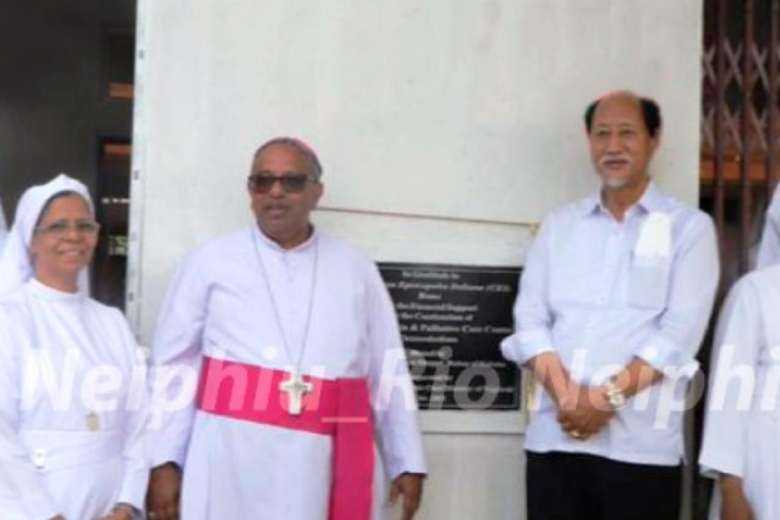 Nagaland Chief Minister Neiphiu Rio (right) with Bishop James Thoppil of Kohima at the inauguration of the state's first palliative care center at Chumukedima, near Dimapur, on April 24. (Photo: Twitter)

The Catholic Church has set up the first-ever palliative care center in Nagaland, a Christian-majority state in northeast India.

The St. Joseph Pain and Palliative Care Centre at Chumukedima, near the state’s commercial hub of Dimapur, was inaugurated by Chief Minister Neiphiu Rio, a Baptist Christian, on April 24.

The center is an initiative of the Diocese of Kohima and will be run by the Medical Sisters of St Joseph, Nirmala Province from Kerala, known for their dedicated service to the sick, the poor and the least of the brethren irrespective of caste and creed.

“This first fully fledged palliative care center in Nagaland intends to provide service free of cost. The state government will extend all possible help to carry out this gratuitous service to the people,” announced Rio.

Nagaland, a predominantly Baptist Christian stronghold, along with the southern state of Tamil Nadu has the highest percentage of elderly people living alone without a spouse, children or any other support, according to the first Longitudinal Ageing Study in India released in 2021.

“The high rate of elderly living alone in Nagaland can be linked with out-migration of the working population because [of] low availability of white-collar government jobs,” the study added.

Rio congratulated the Catholic Church in Nagaland for starting "this new and much-needed service" under the dynamic and visionary leadership of Bishop James Thoppil of Kohima.

“Palliative care is not only to relieve the suffering of the patients but also to comfort and support the families through difficult times,” the chief minister said while appealing to people of the state to come forward and support the charitable cause in every possible way.

Bishop Thoppil said the Catholic Church in Nagaland and the Diocese of Kohima were known for their contributions in the field of education and would serve with equal zeal and dedication in the health sector.

As a charitable establishment, the center will have no set preconditions to avail of its services, said Father Chacko Karinthayil, director of the Shalom Rehabilitation Centre run by the Diocese of Kohima. “Anyone who is in need, anyone who is not able to take care of herself/himself can come here,” he said.

The priest said the center will provide both institutionalized as well as home-based care for those suffering from a terminal illness like cancer or those bedridden with no cure for their illness.

The center will provide palliative care, pain management, physiotherapy, nursing and end-of-life care. There will be an outpatient clinic, an inpatient facility for about 20, medical camps, home-based care, daycare support, training and equipping people to render palliative care at home.

On the issue of funding, Father Karinthayil said: “We will be approaching people willing to help us financially or by volunteering and getting trained to take care of the ailing in their families.”

The center has entered into a memorandum of understanding with the Dimapur-based Christian Institute of Health Sciences and Research (CIHSR) set up in 2007 in partnership between the Christian Medical College, Vellore, the Emmanuel Hospital Association, New Delhi, and Nagaland government as a charitable organization.

Christians form 90 percent of Nagaland’s 2.2 million people. Christianity arrived in this tribal stronghold way back in 1871.