Two schoolgirls walk on a road in Rangpur district, Bangladesh in this file photo. Church officials and rights activists have decried an alarming rise in child rape cases in the country. (Photo by ucanews.com)

Catholic Church officials have blamed moral degradation and an incompetent justice system for the alarming rise in child rape cases in Bangladesh.

A total of 325 children were victims of rape from January to September this year, according to the Bangladesh Child Rights Forum, a national coalition of child rights organizations. Cases numbered 199 in 2014 and 521 in 2015.

In the latest incident, two men abducted and raped a 5-year-old girl in northwestern Dinajpur district on Oct. 18. She was found the next day with torture injuries and taken to Dhaka Medical College Hospital where she remains in critical condition.

The girl’s father filed a case against two locals: Saiful Islam and Afzal Hossain. Islam was arrested on Oct. 24 while Afzal fled the area.

"A climate of instability persists in our society today and a group of anti-socials are using the situation to commit such horrific crimes. It shows a serious moral degradation and lack of social security in society," said Rita Roselin Costa, convener of the women’s desk at the Catholic bishops’ conference of Bangladesh.

"We have laws to protect children but they are not properly implemented. Our legal justice system is so lengthy that victims often give up hope for justice, which encourage perpetrators to commit the same offence repeatedly," Costa said.

"The government must implement child protection laws strongly and properly. Our families and society need to be more aware of social and moral values in order save children from abuse," she said.

Father Anthony Sen, convener of the Justice and Peace Commission had similar views.

"Child rape is absolutely disgraceful and it shows that our society is plunging into moral bankruptcy. Lack of awareness about child rights, a culture of impunity and indifference among people are also contributing factors," he said.

Often, local politicians and administrations shelter criminals because of their financial muscle, which creates an atmosphere of impunity, Father Sen said. 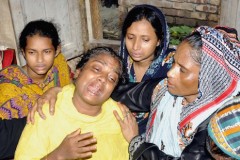 "A strong political will is needed. People in society should also brush aside their indifference and be vocal about the safety and security of our children," he said.

"Many times we have cried out to the government for fast-track courts and exemplary punishments for child abusers. Moreover, there is no separate child affairs department to deal with child rights, health, security and education for children," Chowdhury told ucanews.com.

"The government seems to talk more about the rights of citizens who vote and not children. This is really disappointing and saddening for a country where half of the population are children," he said.

Social campaigns to restore moral values, good governance and justice can help get rid of abuses like rape, he added.

Apart from rape, Bangladesh has also seen a series of brutal child killings in recent times, which prompted angry protests and media outcry. It forced the government to take quick measures against child abusers which led to several death sentences.