Incident is indicative of lethargic law and order, says priest 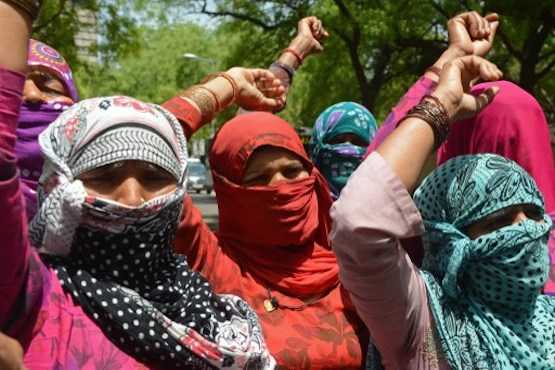 Demonstrating villagers shout slogans against in New Delhi in this file photo during a protest against the rape of Dalit woman in nearby Haryana state. (Photo by AFP)

Church officials in India have condemned the gang rape of a Dalit girl committed by the same five men who raped her three years ago, apparently to avenge her complaint against them.

Indian society has to change how it views women, he continued. "They should not be looked at with lust but with respect and dignity."

The repetition of such incidents only indicates that Indian society is not ready for change, he said. It appears that socially and economically weaker members such as Dalits are often on the receiving end of such atrocities.

The five men allegedly raped the 20-year-old girl in the Rohtak district of Haryana State last week. Apparently she would not succumb to their pressure to withdraw her earlier rape case and settle the matter out of court.

Two of them were arrested for the 2013 incident and had only been released on bail last month. Now, police have arrested three out of the five accused for the latest incident.

"I was leaving college when I saw them. They were the same five men. They forced me into the car and tried to strangulate me. They said they would kill my father and brother. I don't know where they took me," said the woman, quoted in CBS News.

This incident is indicative of "lethargic law and order," said Father Jas (who goes by one name), a parish priest in Rohtak.

"People enjoy the patronage of political parties and bureaucracy," the priest said. "Such crimes happen when the accused know that they will get away with it. These people do not have any remorse or guilt."

"Have you heard upper caste girls getting raped in our community? We are poor and powerless. That's why upper caste men rape our girls. They can get away with anything because they have money and power," Jyoti, a Dalit girl told CNN.

According to a 2013 data of National Crime Records Bureau, India witnessed over 33,000 rapes out of which 971 happened in Haryana.

Dalits, the former untouchable castes within Indian society, irrespective of religion, are often the target of disempowerment, oppression and persecution despite the Indian constitution abolishing caste discrimination and laws making "untouchability" a punishable offence.