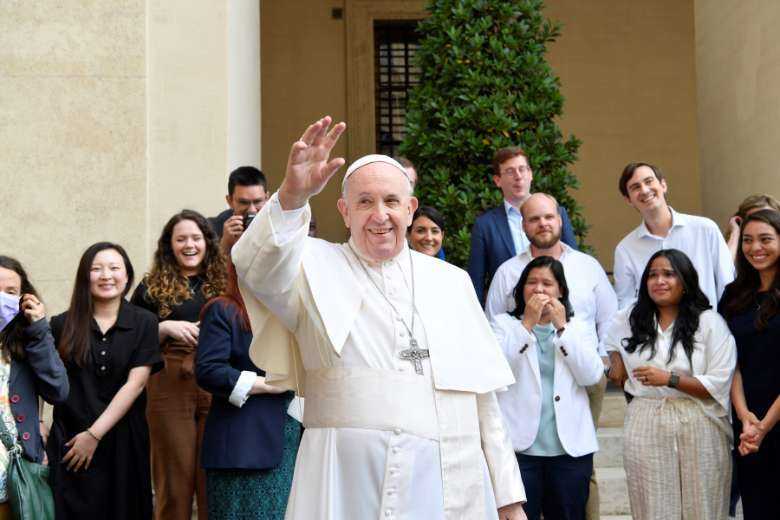 Pope Francis waves as he meets with attendees during his weekly general audience at San Damaso Courtyard in the Vatican on June 9. (Photo: Vatican Media/AFP)

The future of the papal mission to Afghanistan faces a worrying future as foreign forces including an Italian contingent pull out of the strife-torn nation, says the mission’s head.

“What is worrying is the future: I hope that what has been done remains, that there is no going back as is feared,” said Father Giuseppe Moretti, superior of the Missio Sui Iuris in Kabul since 2002.

The fears come as foreign peacekeeping forces of NATO and US troops began to pull out from the homeland of the Taliban in central Asia.

“In recent months, people who have collaborated in the development of the country, professional women or young students, have been killed,” he said in comments to Vatican news service Fides.

John Paul II established the Church's Missio Sui Iuris in Afghanistan in May 2002, led by the Clerics Regular of St. Paul, also known as the Barnabites.

The pontifical mission was housed in the Italian embassy, which was the largest contributor to the US-led international coalition.

The mission’s work area included charity and humanitarian activities as Islam is recognized as the state religion in the country of 37 million inhabitants.

The Italian security forces and its humanitarian agencies were mainly stationed in the capital Kabul and Herat.

Among other things, its activities included training, assistance and advisory activities in the western regions of the country.

On June 9, some 895 Italian soldiers left Afghanistan after 20 years of presence which saw the deaths of 54 Italians.

The Italian contingent “played a significant role from a social as well as a security point of view,” said Father Moretti, a missionary in Afghanistan from 1990 to 2015.

“Our soldiers have earned the affection and esteem of the people, making progress especially in the field of education.”

Father Morett’s concern was echoed by a member of the Council of the Paktia Province.

Abdurahman Qaderi, also a lawyer, said that though many people are happy about the departure of US troops and NATO forces, most of them are worried.

“What is most feared is the risk of a new civil war. We are also frightened by the risk of interference from neighboring countries that might be interested in fostering war,” Qaderi was quoted as saying by Fides.

About the US and NATO troops withdrawal, Father Moretti, said: "It is a historical fact that the Afghan people can find unity only in wanting to send away the foreign military presence.”

Giovanni Scalese, another Barnabite priest in the mission, said the Taliban, which established the Islamic emirate of Afghanistan and ruled it until 2001, "could impose a new constitution.”

The Sui Iuris mission managed a state-owned school, Tangi Kalay — School of Peace, with the help of the Afghan government, which chose the programs and selected teachers.

The priest noted there are fewer than 1,000 Christians in Afghanistan where the Missionaries of Charity (MC) sisters of Mother Teresa of Calcutta and an inter-congregational and non-governmental organization called Pro Bambini di Kabul (For the Children of Kabul) are doing humanitarian work and are housed in the capital Kabul.

The 65-year-old Italian priest was, however, optimistic and did not see a bleak future ahead for Afghanistan.

The Taliban could never able “to eliminate freedom or ignore the rights Afghanis have got used to all these years," he said.

The United States and its NATO allies were engaged in a 20-year war with the Islamic forces, led by the Taliban.

But if the different sides don't talk, how can they form a government together? It's much easier to let weapons talk

The country is divided into 325 civic districts. The Taliban controls 76 (or 19 percent) of those districts, while the government oversees another 127 (or 32 percent).The remaining districts are contested.

The United States and the Taliban signed the Doha pact in 2020 which resulted in the troop withdrawal.

"But if the different sides don't talk, how can they form a government together? It's much easier to let weapons talk," Father Scalese had said in April in an interview.

According to the United Nations, more than 2,300 American soldiers were killed in the conflict, the longest ongoing war in US history, and thousands of civilians were killed and displaced.

Afghanistan has faced internal conflict since 1978 when the government of Mohammed Daud Khan was toppled in a coup d'état.

Soviet troops took control of the country from 1979-89 and before the Taliban seized power in the early 1990s through a bloody civil war.

Their Islamic emirate of Afghanistan was crushed when then US president George W. Bush attacked the country in response to the 9/11 attacks under the military campaign Operation Enduring Freedom.