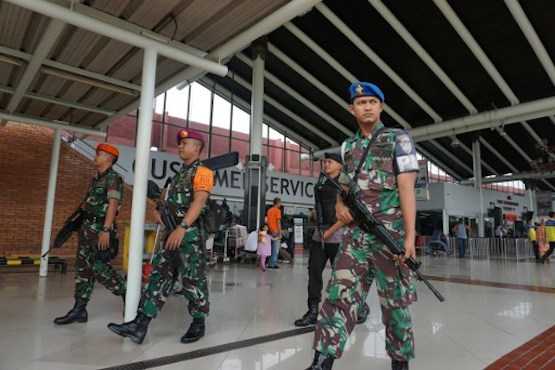 Indonesian soldiers patrol the area around Jakarta's Soekarno-Hatta airport in suburban Tangerang on June 29. The Indonesian government has tightened its security measures ahead of Eid al-Fitr celebrations, marking the end of Ramadan. (Photo by AFP)

An official from Semarang Archdiocese has condemned the suicide bombing attack in Solo, Central Java, saying that, whatever the reason, the attack is unwarranted.

The attack happened just as Muslims around the country are preparing for Eid al-Fitr on July 6-7. The Muslim festival marks the end of the Muslim holy month of Ramadan. "All forms and acts of terror are representations of ignorance," Father Aloysius Budi Purnomo, chairman of archdiocesan commission for interreligious dialogue, told ucanews.com on July 5. "I can only tell people to pity the perpetrators."The priest called on the government, intelligence agencies, and police to work together to raise awareness to counter terrorism. "Do not let there be any more victims, on either side," he said.Police confirmed that the so called Islamic State sympathizer, Nur Rohman, launched the attack at around 7.30 am July 5, breaking into a police station and blowing himself up, injuring the policeman who tried to stop him from entering.Rohman died while the injured policeman was taken to hospital for treatment.President Joko Widodo immediately ordered the police to hunt down the terrorists and their network. He also asked Indonesians not to fear more attacks and to continue with the remaining Ramadan prayer and fasting. "We hope people remain calm," President Widodo said.According to National Police Chief Badrodin Haiti, the bomber had links with Bahrun Naim's network. "They're the ones who masterminded the terror attack in Jakarta earlier this year that killed 14 people," he said. Haiti also instructed his staff to improve preparedness.While no organizations have yet claimed official responsibility, Haiti said that it's possible the attack was part of a global campaign that has included the recent assaults in Bangladesh and Iraq, on Saudi Arabia's Nabawi Mosque, the U.S. consulate in Jeddah, and a grenade explosion in Malaysia."[I believe] it's connected with the call of IS leader [Abu Bakr Al Baghdadi] to launch attacks during Ramadan," Haiti told reporters.