The Indian Church and political leaders across party lines are mourning former Indian president Pranab Mukherjee, who died on Aug. 31 in New Delhi.

Mukherjee, 84, had brain surgery at the Army Research and Referral Hospital in the national capital in late August. He had also tested positive for Covid-19.

“His passing away leaves a deep void in Indian politics. The Church in India will miss him very much for his political statesmanship, moral integrity and fine oratorical skills,” said Cardinal Oswald Gracias, president of the Catholic Bishops’ Conference of India (CBCI).

He recalled that Mukherjee was the chief guest at the CBCI’s Christmas celebrations in December 2018 when he impressed many with his vast knowledge of the Bible.

“We mourn his loss and express our gratitude for all the support and encouragement he gave the Christian community and its activities. May the Almighty grant him eternal rest.”, Cardinal Gracias said.

Mukherjee was admitted to hospital on Aug. 10 for an operation to remove a clot on the brain. He developed a lung infection and septic shock and his condition worsened on Aug. 31 when he fell into a deep coma.

Mukherjee was the 13th president of India and served from 2012 to 2017. Before that, he had been minister of finance, defense and foreign affairs for three separate prime ministers.

He was a college teacher in West Bengal state before first running for public office in 1969.

He was married to the late Suvra Mukherjee, an accomplished singer and artist. He is survived by two sons and a daughter.

Mukherjee was born in Mirati, a nondescript village in undivided Bengal on Dec. 11, 1935. His father, Kamada Kinkar Mukherjee, was a freedom fighter who served in the West Bengal Legislative Council between 1952 and 1964. 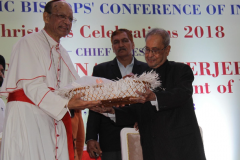 “He served Mother India with the spirit of a sage. In his five-decades-long illustrious public life, he remained rooted to the ground irrespective of the exalted offices he held,” he said.

“Mukherjee endeared himself to people across the political spectrum.”

Prime Minister Narendra Modi said: “Mukherjee has left an indelible mark on the development trajectory of our nation. A scholar par excellence, a towering statesman, he was admired across the political spectrum and by all sections of society.”

Congress party president Sonia Gandhi said she learned a lot from the Congress veteran, who brought distinction to every post he held.

“Fondly called Pranab Da by his well-wishers, Mukherjee established a genuine rapport with colleagues across the political spectrum, and he served our country with the utmost dedication," Gandhi said.