Father Augustine Vattoly speaks to a gathering of protesters on Sept. 22 in Kochi. He now faces disciplinary action for supporting nuns' struggle for justice for a colleague who claims she was raped by a bishop. (Photo by Christopher Joseph/ucanews.com)

India's Syro-Malabar Church is at the center of a storm after a church official threatened action against a priest who helped Catholic nuns to revive their protest against a bishop accused of raping a nun.

Bishop Jacob Manathodath, apostolic administrator of Ernakulam-Angamaly Archdiocese in Kerala, sought an explanation from Father Augustine Vattoly about his involvement in leading a protest against Bishop Franco Mulakkal of Jalandhar.

Nuns, priests and lay people who support the alleged rape victim say the archdiocesan move aims to silence Catholics and threaten priests from becoming involved in the protest.

"It is an attempt to terrorize us further," said Sister Josephine, one of the five nuns who publicly protested in Kerala, resulting in state police arresting Bishop Mulakkal on Sept. 21.

"Such pressure tactics will not work. We will fight until we get justice. We are with Father Vattoly, come what may."

Police arrested Bishop Mulakkal days after the Vatican removed him from administrative duties in his diocese and an apostolic administrator was appointed.

Kerala's High Court bailed Bishop Mulakkal on Oct. 15 and he returned to his northern diocese.

Father Vattoly received a letter just two days ahead of a Nov. 14 demonstration in Kerala calling for revocation of the bishop's bail because he had become a threat to witnesses in the case.

"I hereby strongly prohibit you from organizing and attending" the protest, said Bishop Manathodath's letter, asserting that "disobedience will incur ecclesiastical actions."

The letter also sought Father Vattoly's explanation for his speeches that reportedly incited hatred and sedition against the church and its authorities. It asked for an explanation of his reported association with extremist and atheist groups. 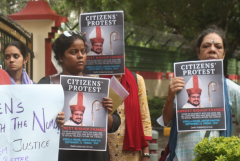 A senior priest who asked not to be named told ucanews.com that the apostolic administrator's letter "shows that he is under severe pressure" to show that he is acting against those publicly protesting.

He recalled that the archdiocese itself faced a crisis a year ago when some priests alleged serious financial irregularities in land deals involving Cardinal George Alencherry of Ernakulam-Angamaly, major archbishop of the Eastern-rite church.

"There is a strong lobby within the church that wants to silence people who speak against the injustice and moral corruption within it. Bishop Manathodath is under their pressure," said the priest.

The letter is "just an expression of that pressure. Nothing serious … because people are aware of the truth," he said.

Joseph Varghese, a Catholic leader fighting for financial transparency in the church, told ucanews.com that the letter shows "authorities' foolishness" because people will take it as the official church "fighting to cover up truth and hinder justice. The church's credibility will be questioned."

Riju Kanookaran, another Catholic leader, told ucanews.com that the letter was an "attempt to suppress all voices of dissent."

Police in Kerala are investigating a complaint filed by a 48-year-old nun who accused the bishop of raping her four years ago and abusing her 13 more times over the following two years.

Bishop Mulakkal claims that the nun, former superior general of the Missionaries of Jesus congregation under the bishop's patronage, began making baseless allegations when church authorities started disciplinary action against her for violations of her religious vows.