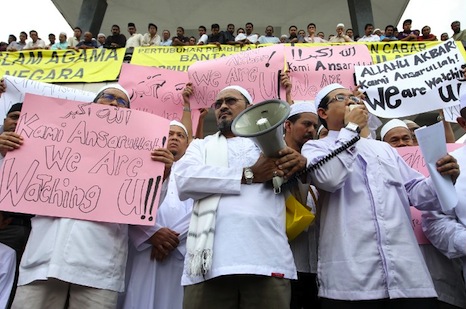 The releases of some impounded Bibles sparked Muslim protests in 2011 (picture: Mohd Rafsan/AFP)

A Catholic weekly newspaper in Malaysia this week lost its latest legal battle over the right to use the word 'Allah' for God in its local language edition.

in a case that has sparked nationwide debate over which religion has exclusive rights to the word Allah, a three-member panel of the Court of Appeal ruled unanimously that the government’s efforts to ban the use of the word in Christian publications will continue. The next hearing is scheduled for September 10.

The case dates back to a dispute over the re-registration of the Herald’s publishing license, following criticism from the Home Ministry over political articles that appeared in its pages.

In 2009, the local language edition receeived an injunction to cease publication. The Herald and the archdiocese of Kuala Lumpur successfully sued for the right to continue, but the government then lodged an appeal against the ruling, which stated that Muslims did not have exclusive ownership of the word Allah.

The court ruling spurred acts of vandalism against Christian churches and death threats against the presiding judge in the case, Lau Been Lan.

Also in 2009, the government seized shipments of local language Christian Bibles that contained the word Allah.

An agreement signed in 2011 by Prime Minister Najib Abdul Razak enabled the impounded Bibles to be released. But prosecutors argue that the agreement has no bearing on the Herald’s case because it does not specifically grant rights to the use of the word Allah.

In the lead-up to national elections earlier this year, the issue became a referendum on religious identity in the country, with Muslims seeing the issue as an attack on Islam and Christians casting the dispute in terms of religious freedom.

In a rare statement to the media, the Archdiocese of Kuala Lumpur addressed the war of words that has surrounded the Herald’s court case.

“The Catholic Church is gravely concerned by the recent statements made by individuals and organizations with regard to the use of the word ‘Allah’, a matter which is pending at the Court of Appeal,” said Fr Jestus Pereira, chancellor of the archdiocese in the statement. 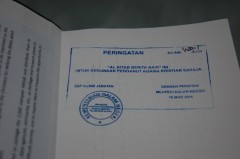 “Many of these statements are stoking racial sentiments and creating religious tension in our country.”