An injured Father Victor Wiro Patinggi (on crutches) of St. Mary Queen of Rosary Parish in Mamuju surveys the interior of his church damaged by a 6.2 magnitude earthquake on Jan. 15. (Photo supplied)

The Indonesian Church is distributing aid to victims of an earthquake in West Sulawesi province last week that killed more than 70 people and forced thousands to flee their homes.

The 6.2 magnitude quake rocked Mamuju, the provincial capital, and Majene district on Jan 15, with the epicenter 10 kilometers under the sea. According to Indonesia’s National Disaster Management Agency, at least 73 people had died as of Jan. 18 and at least 700 were injured.
Donate to UCA News with a small contribution of your choice

More than 20,000 people fled their homes, while thousands of buildings and public facilities were badly damaged, including communication networks, and electricity.

Rescue teams were still searching for people still trapped under the debris.One day after the earthquake, Caritas Indonesia (Karina) and Caritas in Makassar Archdiocese in South Sulawesi province began distributing aid to victims through St. Mary Queen of the Rosary Parish in Mamuju.“We established a coordination post and kitchen in the church compound on Jan. 16,” parish priest Father Victor Wiro Patinggi told UCA News.He said the post was providing food and also drugs, tents, clothes, masks, disinfectants and hand sanitizer.The priest said he was at the rectory when the quake struck and was injured by broken glass. Part of the church building was badly damaged, he added.Father Patinggi said none of his parishioners had been killed but many were injured.
Related News 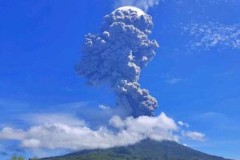 Thank you. You are now signed up to Daily newsletter
He said his parish has more than 2,000 Catholics, many of whom fled their homes after the Indonesian Meteorology, Climatology and Geophysical Agency urged people to move to safer locations for fear of aftershocks and a tsunami.“They still have to observe health protocols because Covid-19 is still rampant in the region,” he said.Father Bernard Cakra Arung Raya, chairman of Caritas in Makassar Archdiocese, said his team was distributing aid in Mamuju and would soon be doing so at a mission station in nearby Majene district.He said the archdiocese office in Makassar was serving as a center to receive donations.“We have received help from Karina, Catholic individuals and several Catholic groups. They have only sent money, so we will buy the materials needed by victims,” Father Cakra told UCA News.He said he and volunteers have distributed tents, foods, drugs, blankets and masks to the church in Mamuju since Jan. 16.Father Fredy Rante Taruk, Caritas Indonesia’s executive director, said he has sent a team to West Sulawesi to work with the local team.“Karina is helping with money and logistical needs such as food, clean water, blankets, tents and drugs,” he told UCA News.Karina was also working with Humanitarian Forum Indonesia, a religious-based aid group, and government agencies.

Pope Francis said he was saddened by the loss of life and destruction caused by the earthquake.

The pope expressed his heartfelt solidarity with all those affected by the natural disaster, Vatican News reported.

Indonesia is frequently hit by earthquakes. In September 2018, a quake struck Central Sulawesi province killing at least 2,000 people, while a month earlier 91 people died in two quakes that hit the holiday island of Lombok.