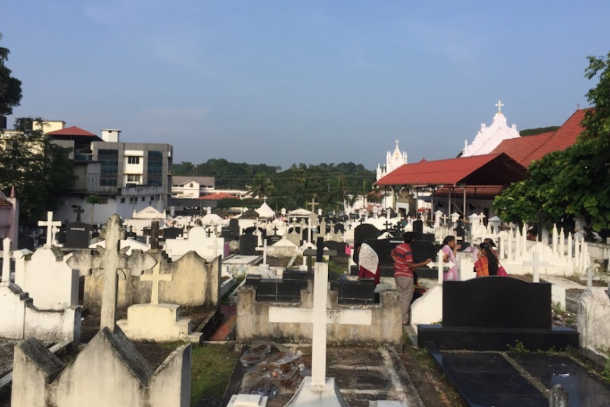 People visit a Jacobite Christian cemetery in Kottayam district of Kerala. Factionalism among Christian groups has forced the state to propose a law on burial rights. (Photo supplied)

Catholic Church leaders in Kerala have expressed apprehension about the state’s communist-led government proposing a new law on the burial rights of Christians.

The proposed law has several aspects that need clarification to ensure that it does not end up obscuring the rights and freedom Christians currently enjoy, Cardinal George Alencherry, major archbishop of the Syro-Malabar Catholic Church, said in a statement.

The head of the Eastern-rite church was responding to the draft Kerala Christian Cemeteries (Right to Burial of Corpse) Bill, 2020, that the government presented in the state legislature on Feb. 6.

The law primarily aims to address the burial rights that Christians of two warring factions — Orthodox and Jacobite. Their century-old quarrel over ownership of land and churches has often resulted in each faction denying access to the other, even to cemeteries to bury their dead.

Kerala has witnessed several violent fights between the factions, forcing the government to issue an ordinance last month to facilitate the peaceful burial of the warring Christian groups in their respective parish cemeteries.

The government proposes to make it a law, covering all Christians.

The bishops “are apprehensive of the law,” said Cardinal Alencherry, president of the regional bishops’ body. He urged the communist-led state government “to hear the heads of other churches” before the law is enacted.

However, the government plans to pass the proposed law in the current session of the assembly, failing which the ordinance, valid only for six months, will automatically get lapsed.

The prelate appreciated the government taking the initiative to address the rivalry between the two Christian factions through the bill. “But the bill has left many unanswered questions about the well-managed centuries-old cemeteries of other denominations, including Catholics,” the cardinal noted.

Opposition Congress party legislators said the proposed law sought to homogenize the final rites of all Christian communities. It goes against constitutional guarantees to protect the plurality and diversity of faith communities.

Opposition leader Ramesh Chennithala said the bill in its current form would pave the way for unforeseen consequences.

“The bishops feel, if the law in the current form is passed, it will lead to more complicated legal issues among other Christian groups," Father Antony Thalachelloor, spokesman of the Syro-Malabar Church, told UCA News on Feb. 7.

The bishops want the government not to rush the bill but have a wide range of discussions.

However, state minister for law and parliamentary affairs A.K. Balan dismissed the charges as baseless.

“Proposed legislation that seeks to guarantee the right to burial for Christians will not adversely affect any particular denominations,” he told media.

“It was aimed at empowering families belonging to a parish with the right to be buried in the cemetery where their ancestors had been interred.”

A Catholic lawyer, who did not want to be named, said the draft law mandates every parishioner a right to be buried in his parish cemetery, notwithstanding what the parish priest or the diocesan authorities think about it. “It may diminish some clerical power,” he said.

Some Kerala Catholic dioceses maintain a history of denying Catholic burial rites and space in cemeteries to Catholics who have been critical of the hierarchy.