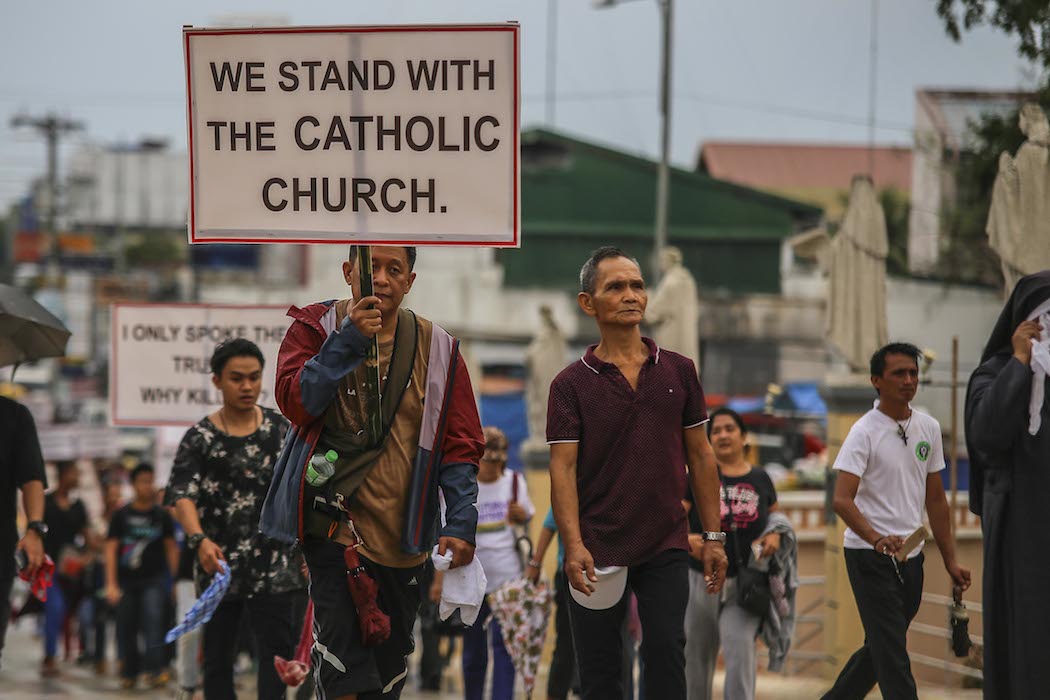 Catholics in the northern Philippine diocese of Lingayen-Dagupan join a pilgrimage to a Marian shrine to observe the "Day of Reparation" on June 18 to protest the spate of killings in the country in recent months. (Photo by Karl Romano)

Catholic dioceses in the Philippines marked a "Day of Reparation" on June 18 to dramatize their protest and condemnation of a wave of murders, including those of priests, in recent months.

In Manila, Auxiliary Bishop Broderick Pabillo called on Catholics to speak out against the killings and human rights abuses being committed around the country.

"If we all speak out our voices will reverberate, it will be heard in the whole country," said the prelate. "Enough of the lies, enough of the bad words, stop the extrajudicial killings," he added.

In his homily during Mass attended by priests, nuns, seminarians, and rights activists, the prelate said people are asking why the church silent in the midst of these abuses.

"They don't expect church people to have guns, but they expect us bishops, priests, nuns, and lay groups to speak out," said Bishop Pabillo.

Bishop Pabillo accused the president of using Congress to press for the restoration of capital punishment, the impeachment of his political opponents, and for rewriting the constitution.

"The law is being used to have a sense of legality in whatever he does," said the prelate even as he appealed to Catholics "not to take revenge."

"Let us not use the weapons being used by oppressors. Let us face evil but not in their way," he said. "What will be our weapon? Guns? No. Words. Words of God," said the prelate.

"We will only drive away the evil spirit in [the presidential palace] through prayer with faith," said Bishop Pabillo. "Let us not be silent. Let us fight by praying with penitence." In Lingayen-Dagupan Archdiocese members of the clergy and seminarians led a pilgrimage to a popular Marian shrine in the town of Manaoag to observe the "Day of Reparation."

"Today, the murderers are commended and the king is undisturbed," said the bishop. "Let God's justice be upon those who kill the Lord's anointed ones. There is a special place in hell for killers," he said.

The letter was written in response to the death of Father Richmond Villaflor Nilo the fourth Catholic priest to be shot in the Philippines in the last six months and the second within a week.

In Albay province, in the southern Philippines, Catholic parishes held a series of Masses and set up "holy hours" and rang church bells to show support for the "Day of Reparation."

In Baguio City, Bishop Victor Bendico expressed sadness over "the sins of sacrilege and calumny hurled against our priests and bishops."

"We continue to pray for our brother priests who have been murdered," said the prelate.

On June 6, Father Rey Urmeneta of St. Michael the Archangel parish in Calamba City survived an attack by two gunmen.

On Dec. 4, 2017, Father Marcelito Paez was shot and killed in the town of Jaen, also in Nueva Ecija province.