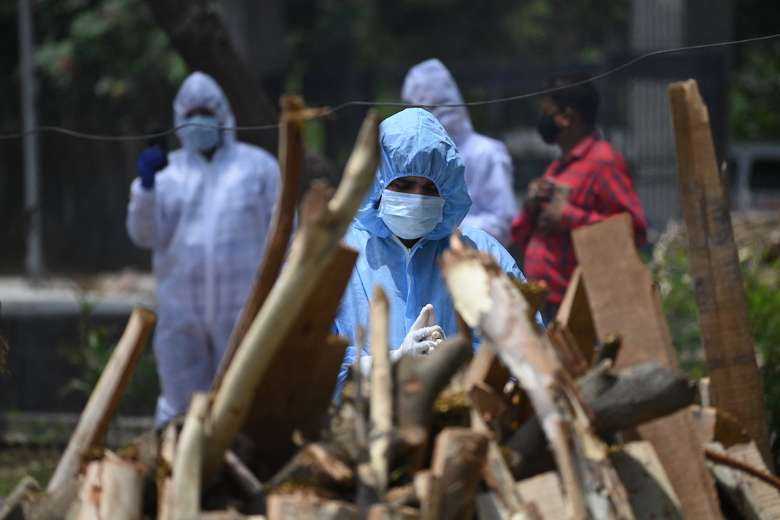 A relative wearing personal protective equipment performs the last rites before the cremation of a Covid-19 victim at a cremation ground in New Delhi on May 11. (Photo: Sajjad Hussain/AFP)

Catholic leaders have welcomed a move by India’s Supreme Court to appoint a team of doctors and bureaucrats to coordinate the distribution of medical oxygen across the country after hundreds died without oxygen in hospitals.

The top court’s intervention will go a long way to saving many lives, said retired Archbishop Thomas Menamparambil of Guwahati, based in Assam state in northeastern India.

“It has finally exercised its judicial powers and formed an expert committee to deal with the crisis,” the Salesian prelate told UCA News on May 10.

Archbishop Menamparambil maintains that the current medical catastrophe could have been avoided if Prime Minister Narenadra Modi had acted in time with vision and determination.

“If amid national tragedies he [Modi] is lost in self-importance, the machinery under him collapses. Hubris has a price. That is what we are paying for,” he wrote in an opinion peace last week in Capuchin-run Indian Currents weekly.

“I am glad the top court has interpreted the mind of the people very objectively. However, I wish that the people would speak up more.”

The court’s May 8 decision to appoint a 12-member task force came after a national uproar, primarily on social media, over government inaction in the face of increased Covid-19 deaths for want of medical oxygen in hospitals.

The government also failed to address a lack of hospital beds and medicines as the second wave of the pandemic overwhelmed the health system since mid-April, when the country began to report more than 300,000 new cases daily.

The toll increased in the first week of May to more than 400,000 cases and 4,000 deaths daily. The numbers have slightly dipped since then.

The court appointed the federal government’s cabinet secretary as convener of the task force, which will have 10 eminent doctors including two from Christian Medical College, Vellore, in the southern state of Tamil Nadu.

The court maintained there is a need to ensure that oxygen distribution is done on a scientific, rational and equitable basis.

Archbishop Menamparambil said the government’s priorities were misplaced and it stressed peripheral matters such as organizing religious festivals and building temples, a new prime minister’s residence and a parliament building.

Jesuit Father Cedric Prakash noted that it was the first such intervention from the top court since Modi took power seven years ago.

“Since the executive has abdicated its responsibility, the judiciary has stepped in to save the country, which is a very good sign for our democracy,” Father Prakash, who is based in Gujarat, Modi’s home state, told UCA News on May 10.

“When the executive begins to tell lies and ignores scientific warnings about the pandemic, a little bit of judicial activism is good for the country.”

The priest said Modi’s administration had ignored experts’ warnings of a stronger second wave and made no preparations. It also falsely claimed to have defeated the pandemic, misleading the masses.

He also accused the government of mishandling the situation by allowing super-spreader events in March-April such as political rallies, cricket matches and Hindu festivals.

Millions of Hindus gathered and bathed in a holy river in Uttarakhand state throughout April without masks and vaccination and returned home to spread the virus to remote villages.

“I personally feel this government has no right to continue in office and it should resign,” Father Prakash said.