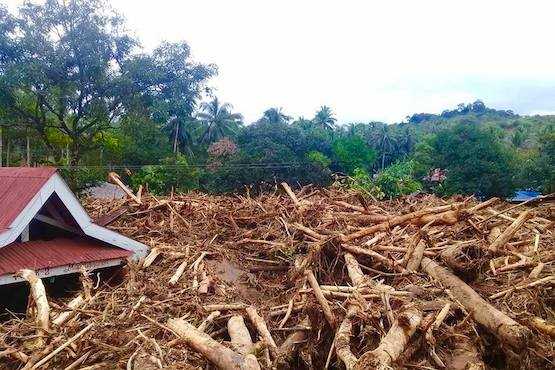 Mud and debris from nearby mountains bury houses in several villages of Surigao del Sur in the wake of rains brought about by tropical storm Sanba last week. (Photo by Ian Cordita Ganas)

Church leaders in Mindanao have joined calls for an investigation into what caused devastating floods that displaced thousands of families and killed at least 16 people last week.

Landslides and floods triggered by heavy rain dumped by tropical depression Sanba displaced at least 37,370 individuals in the southern Philippine region of Caraga.

The scale and speed of the flooding took many by surprise.

Bishop Nereo Odchimar of Tandag said the disaster caused "untold suffering to people" in his diocese who lost their homes and farms.

"Many residents are calling for an investigation into the reasons why the flood came so fast," said the prelate. He said siltation ponds in some mines collapsed, causing a rush of floodwater.

The government's local social welfare office reported at least seven people killed and 18 others injured in the region.

In one incident, a child was killed after a settling pond in one mine overflowed and flooded villages downstream, burying hundreds of houses.

In areas of Agusan del Norte and Surigao del Norte provinces, mine waste drained into a river, causing connecting rivers to rise, which destroyed bridges and made roads impassable.

Father Raymond Ambray of the environmental group Caraga Watch, said the loss of lives could have been minimized if the government pursued its ban on mining in the area.

He said a lack of information and the overall silence of local government officials about the disaster is "deafening."

"Is it because officials of the most affected local government units are miners themselves or are supporting large scale miners?" the priest said.

Father Cambray said they continue to wait for news from hinterland communities that were buried under mud.

Tropical storm Sanba hit the southern part of the country on Feb. 12. The Philippine is struck by 20 storms or typhoons each year on average, many of them deadly.

The country's deadliest on record was Super Typhoon Haiyan, which left more than 7,350 people dead or missing across the central Philippines in November 2013.