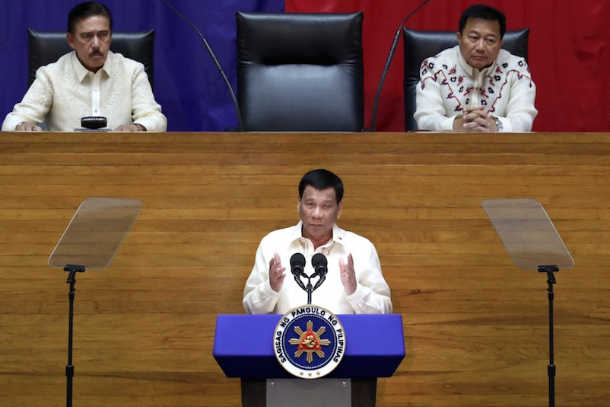 Philippine President Rodrigo Duterte delivers his third State of the Nation Address before the joint session of the Philippine Congress on July 23. (Photo courtesy of the Presidential Communications Office)

Catholic Church leaders and various activist groups in the Philippines have, for the most part, condemned Rodrigo Duterte's record as president at the start of his third year in office.

His human rights record in particular received most attention.

As if to spite his critics, the president in his State of the Nation Address on July 23 said his concern was not human rights but the lives of people.

"Your concern is human rights, mine is human lives," the president told critics of his war against narcotics in his speech.

"The lives of our youth are being wasted and families destroyed, and all because of chemicals called shabu, cocaine, cannabis, and heroin," Duterte said in his 48-minute address.

The comments did not sit well with Bishop Pablo Virgilio David of Kalookan whose diocese in the northern part of the capital has witnessed most killings.

"Such a statement implies that the victims of drug-related killings are not human," said the prelate in a Facebook post hours after the president delivered his speech.

"Is not the right to life the most basic human right?" said Bishop David, vice president of the bishops' conference.

He said the Catholic Church "can never agree" with the president's view. He said Duterte's statement is "illogical."

"With all due respect, the church can never agree with such a statement," said Bishop David, adding that for the church, drug dependents "are sick people" who need rehabilitation.

The prelate said the government should instead focus its anti-narcotics war against big-time drug dealers.

"How come the supply of illegal drugs remains steady in spite of all the killings?" he said.

In his speech, Duterte vowed to continue his "war on drugs," saying "it will be as relentless and chilling as on the day it began."

"Let me begin by putting it bluntly: The war against illegal drugs is far from over," said the president in a prepared speech.

"The illegal drugs war will not be sidelined," he said.

Since June 30, 2016, when Duterte assumed office, up to June 30 this year, the Philippine National Police claimed more than 4,500 people were killed in legitimate anti-drug operations.

Human rights groups, however, said thousands more have been killed by still unidentified assailants throughout the country.

Hours before Duterte delivered his speech, Manila Auxiliary Bishop Broderick Pabillo, a vocal critic of the president's policies, expressed hope the leader would admit to his mistakes.

He said Duterte's previous speeches were filled with arrogance and lacking in substance.

"We want to know the real score of government action, or inaction, or wrong action ... however ugly they may be," he said.

"Enough of the insults, cursing and accusations," said the bishop.

For the first time, however, the president did not utter any cuss words during his speech.

One prelate, Bishop Ruperto Santos of Balanga, even lauded the president for promising to take care of the well being of migrant workers.

"It is commendable that he promised to fight and work against abusive employers," said the bishop who heads the Episcopal Commission on Migrants and Itinerant People.

He said he is "thankful to the president for mentioning our beloved [migrant workers] as he appreciates their sacrifices and services for their loved ones."

"He also mentioned the resiliency of [migrant workers]," added the prelate.

Bishop Gerardo Alminaza of San Carlos said he assumes the president has "all the good intentions to serve the best interest of our country."

The prelate, however, said "it's obvious after two years [that] there are unfulfilled promises."

He said that while the Catholic Church is one with Duterte in his goals "to alleviate poverty, stop corruption, solve drug problem ... we can't agree with his approaches."

Bishop Alminaza said the "total disregard of human rights and human dignity, disrespect of women and other people's beliefs and religious convictions" are not acceptable.

Archbishop Antonio Ledesma of Cagayan de Oro said Duterte's war against drugs "is a classic example of how the end cannot justify any means."

"It can also lead to authoritarianism and even a return to dictatorship that we have all decried," said the prelate of the Mindanao archdiocese.

The president said he would immediately sign a law that creates a new Muslim region in the southern Philippines and promised "significant increases" in the budget for Mindanao.

He called on Congress to pass a law that will prohibit all forms of casual labor contracting, admitting that he has no power to end the scheme despite his election promise to do so.

He also urged legislators to pass a law that will create a national land use policy and a disaster management department.

The president also warned mining firms to be responsible and stop destroying watersheds, forests and bodies of water, adding that natural resources must benefit all Filipinos.

For the first time, the president stuck to his prepared speech, the shortest in his three annual reports to the nation so far.

Mark Saludes and Melo Acuna contributed to this report.