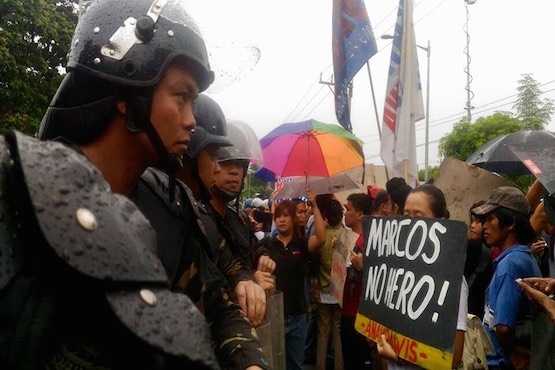 Police and protesters face off around the national cemetery on Sept. 11 as the family of the late dictator Ferdinand Marcos celebrate his 100th birthday. (Photo by Christian Yamzon)

By Roy Legarde and Karl Romano

Catholic Church leaders in the Philippines have called on laypeople to devote more time and energy to secular issues like human rights, on the eve of the late dictator Ferdinand Marcos' centennial birthday.

"We cannot allow the destruction of lives to become normal. We cannot govern the nation by killing," Cardinal Tagle said in his strongest statement yet against Duterte’s drug war.

The cardinal ordered the tolling of church bells every night at 8pm, as a way of remembering the dead.

Bishops and other clergy voice disapproval of what they thought as Duterte pandering to Marcos’ heirs.

Duterte last week hinted at granting them possible immunity, after they reportedly offered to "return a few gold bars" amassed by their father decades back "to secure the Philippine economy".

"Let there be justice for those who have been oppressed, victimized and who suffered during the martial law years, Balanga Bishop Ruperto Santos said.

"Those proponents [of martial law] should be and must be prosecuted," Santos said.

"First, openly confess and admit all those human atrocities, corruptions; be truly and publicly contrite; return and restitute all those ill gotten wealth without any preconditions," said Santos.

"Duterte's action of honoring a dictator who caused great havoc in our country is a travesty of our national history," Bishop Bastes said.

Redemptorist Father Amado Picardal said no conditions should be attached to the Marcos children’s offer to return wealth amassed during their father’s presidency.

Father Picardial, who was tortured as a seminarian for distributing resistance leaflets, said the Marcoses admitted their guilt with the offer.

Sacred Heart Father Benjamin Alforque, another cleric who suffered torture under Marcos, pointed out the contrast between Duterte’s "leniency" towards the former first family and his contemptuous attitude towards suspected drug addicts and dealers.

"The Marcoses get the red carpet while the government deprives drug suspects of due process," Alforque said.