Government needs to decide if its people live or die, they say 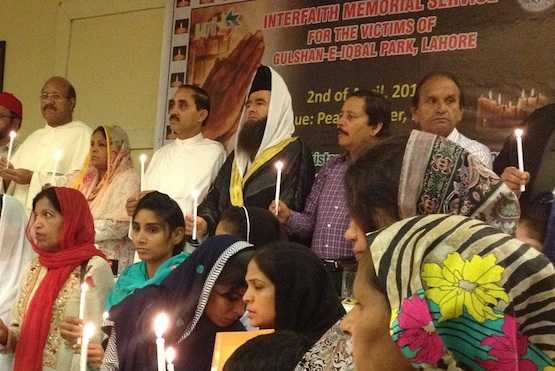 Church leaders in Pakistan are calling for a military crackdown on terrorism in Punjab province following a bomb attack targeting Christians in a public park attack in Lahore on Easter Sunday.

The attack left at least 76 people dead, 17 of the victims were Christians, church sources said.

Jamaat-ul-Ahrar, a Taliban splinter group, which has pledged allegiance to the Islamic State terrorist group, claimed responsibility for the bombing and released an image of the suicide bomber on social media.

Father Pascal Paulus, president of the church's Major Superior Leadership Conference, made the demand for military intervention at an interfaith memorial service for the victims in Lahore on April 2. The conference, representing 35 religious congregations in Pakistan, works on justice and peace issues.

"All provincial governments must cooperate with the military leadership to root out terrorism. An army operation must be carried out in Punjab," he said.

Opposition parties and minority groups have repeatedly called for the military to eliminate safe havens and militant cells in Punjab.

According to Dominican Father James Channan, regional coordinator of the United Religions Initiative-Pakistan, the time has come for the government to decide on life or death, peace or war for its people.

"It should not be scared and go after terrorists and their facilitators. It is a challenge for us to formulate a counter strategy," said the priest, who also demanded compensation for victims of the park bombing.

He said recent deadly attacks against Christians seemed to be following a pattern in that they occurred on a Sunday.

In September 2013, two suicide bombers carried out an attack at the All Saints Church in Peshawar following a Sunday service, leaving more than 80 dead.