The whereabouts of Father Teresito Suganob, vicar of the Prelature of Marawi, and several other hostages remain unknown after they were taken by gunmen on May 23. (Photo courtesy of Sai Mamalo)

Church leaders in the Philippines have appealed to gunmen claiming to have links with the international terror group Islamic State to spare the life of a Catholic priest taken hostage this week.

"I appeal to the consciences of the hostage takers not to harm the innocent as the Islamic faith teaches," said Cardinal Orlando Quevedo of Cotabato in a statement.

Members of the Maute group, which clashed with security forces in Marawi City on May 23, have taken Father Teresito Suganob, vicar of the Prelature of Marawi, and several other people hostage.

As of early morning on May 25, nothing had been heard of the whereabouts of the priest and the prelature's staff and some churchgoers who were taken captive.

Cardinal Quevedo also appealed to Muslim religious leaders to intercede with the gunmen, who claimed to be Muslims, for the safety of the hostages who were reportedly used as "human shields" when the militants attacked the city.

"I appeal to religious leaders of Islam to influence the hostage takers to release the hostages unharmed," said the Mindanao prelate.

He also prayed for the "safety of the innocent people" of Marawi.

Bishop Broderick Pabillo of Manila also issued an appeal "to set the hostages free" as he prayed for the situation in Marawi "to be resolved without any further violence."

Filipino Muslim religious leaders condemned what they described as "the barbaric and satanic terror attacks in Manchester and in Marawi City."

"We must face this challenge of violent extremism and terrorism together as one human family facing common enemies — injustices and terrorism," said the Ulama Conference of the Philippines. 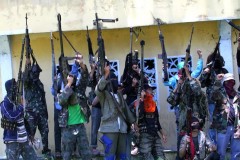 The United Religions Initiative, a global community of some 850 interfaith groups in 101 countries, also issued a call for the immediate release of the hostages.

The group described Father Suganob as a "long-time leader and an active member" of the organization who works to "help heal lasting wounds of conflict in local communities in Mindanao."

Rev. Victor Kazanjian Jr., the group's executive director, said the priest "envision[s] a world in which people of all religions and cultures affirm their common humanity and work together for peace, justice, and healing for the Earth."

"The violence in Manchester and the violence in Mindanao are just two instances of violence being committed in the name of religion around the world," said Kazanjian in a statement.

At least 22 people were reported killed and 120 others were injured following an explosion outside a concert venue in Manchester on May 22.

In Marawi, the military confirmed that five soldiers were killed and 31 others injured in the attack on the city. At least two policemen were also reported killed.

Philippine authorities refuse to release the number of casualties and fatalities as "clearing operations" continue.

President Rodrigo Duterte cut short his visit to Moscow on May 24 and declared martial law in the southern Philippine region of Mindanao following the attack.

The conflict in Marawi started after soldiers and policemen launched an operation aimed at arresting Isnilon Hapilon, leader of the terrorist group Abu Sayyaf who was reportedly hiding in the city.

An ensuing firefight between security forces and members of the Maute group who were protecting Hapilon escalated and spread to several villages in downtown Marawi.

Thousands of residents have already fled the city and sought shelter in nearby towns and cities.