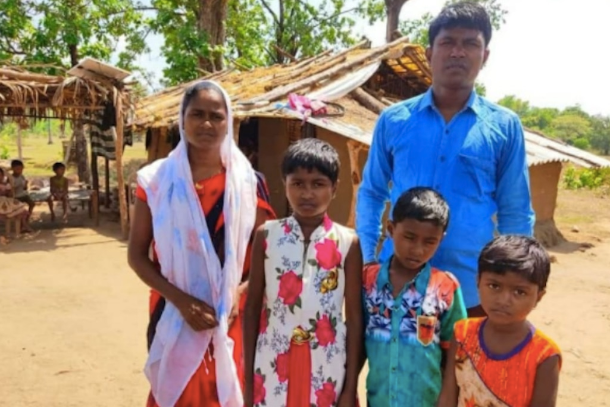 Pastor Munsi Deo Tando with his wife and children near his house in western Maharashtra state. He was allegedly shot dead by Maoist rebels on July 10. (Photo: supplied)

Church leaders in India have condemned the murder of a Protestant minister, the third in less than a month in India.

Pastor Munsi Deo Tando was shot dead allegedly by Maoist rebels in the forested district of Gadchiroli, in the western state of Maharashtra on July 10.

“His bullet-ridden body was later recovered from the forest,” said Shibu Thomas, founder of Persecution Relief, an ecumenical forum that supports persecuted Christians in India.

Archbishop Fexlix Anthony Machado, secretary-general of the Catholic Bishops Conference of India said he was "very sad to learn that a minister of Christ was killed for his faith.”

“I condemn it,” the archbishop told UCA News on July 13. “It was a cowardly act. No one should take the life of others. Violence is not a solution to any problem and we appeal to those indulging in such bloody acts to respect human life and give up arms,” he added.

“We live in a civilized society where life is protected not taken in a brutal manner like in the case of pastor Tando,” said the prelate, the head of Vasai diocese in the state.

Narrating the incident, Thomas told UCA News on July 13, a group of suspected Maoists including three women forced their way "into the humble house of the pastor where he was on a fast and prayer.”

The house thatched with leaves and mud walls is located in the forested Bhatpar village in the Maoist-infested Gadchiroli district.

The outlaws, Thomas continued, “tied his hands behind his back and ordered him to walk with them. He had no choice so went with them and later his bullet-ridden body was recovered from the forest half a kilometer from his home," he said.

Pastor Tandor is survived by his wife Jaini and four young children. “The family”, Thomas added, “faced a lot of resistance from the local villagers for his faith in Jesus and they openly questioned their faith and even threatened to socially exclude them if they failed to give up their faith.”

Since he refused to succumb to their threats and persecution, they tried to brand him an associate of the Maoist, locally called Naxalites, in an attempt to put him behind bars. Maoists who try to run parallel government in several areas of India are outlaws and face arrest and jail.

“None of those pressure tactics deterred him from following Christ and going ahead with his ministry and that finally ended in his brutal murder,” Thomas lamented.

Thomas also deplored his murder as a highly condemnable act. “The pastor was not harming anyone, on the contrary was leading a life per his calling.”

“This is the third incident of a Christian minister being killed for their faith in Jesus in less than a month,” he added.

Samaru Madkami, a 14-year-old Christian boy, was hacked to death by zealots because of his faith in Jesus Christ. This happened in Kenduguda, a village in Malkangiri district of Odisha, eastern India. He and his entire family had converted three years ago.

Kande Mudu was murdered by an armed group in Bari village in the Khunti district of Jharkhand, another eastern state.

The group broke into Mudu’s home, attacked the 27-year-old and slit his throat. He and his family, who had accepted Christ four years ago, were being harassed by local fundamentalists.

Bindu Mudu, his wife and his two daughters fled the village and their whereabouts are unknown. No arrests have been made thus far, Thomas said on July 13.

The NGO has recorded 2,067 cases of hate crimes against Christians in India between January 2016 and June this year.