Situation remains critical as nearly 720,000 people in 22 districts in Assam are in need of food and medical supplies 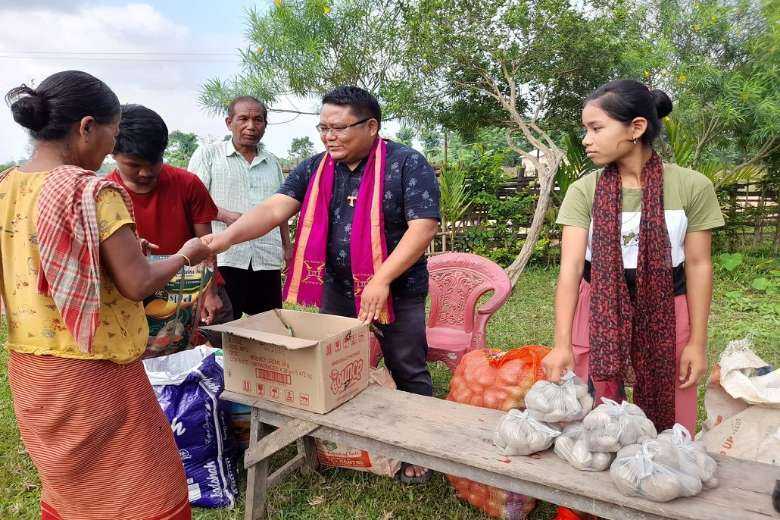 Officials of Guwahati Archdiocese distribute dry rations to people in a flood-affected area in Assam on May 21. (Photo supplied)

Indian Catholics have joined relief and rescue efforts organized by NGOs and government agencies as the death toll from flooding in Assam has reached 24 in the northeastern state.

According to the Assam State Disaster Management Authority, the situation remains critical as nearly 720,000 people in 22 districts are reeling under the deluge, with Nagaon, Hojai, Cachar, Darrang, Morigaon and Karimganj districts badly affected.

“The flood situation in the state is very serious as several people have lost their lives. We pray for the bereaved families but in the meantime our immediate priority is to provide food, water, dry rations and medicine to affected people as the government is engaged in rescue and relocating people to safe places,” Archbishop John Moolachira of Guwahati told UCA News.

“Our social service wing along with its team are distributing food such as biscuits, bread, water and dry rations like rice, lentils, vegetables and salt as well as medicine and tarpaulins."

“We are more engaged in places where the government has minimum or no reach due to damaged roads. We and the government are carrying out relief and rescue work independently and once the situation is under control, we can think of rehabilitation.”

Jonas Lakra, team leader of disaster management at Caritas India, told UCA News that its teams in Assam state are "at ground zero" and trying to get access to some areas cut off from rest of the state.

"According to government reports, five people have lost their lives due to landslides in the state and the Church is on alert mode if any help is required"

“Once the assessment is over, which is expected in another four to five days, we will start relief and rehabilitation work. As of now, we are in touch with all the government agencies, NGOs and archdiocesan officials who all are working independently,” he said.

Father Felix Antony, public relations officer of Miao Diocese in Arunachal Pradesh, told UCA News that the flood situation in the state is not as serious as in Assam and the Church is taking a wait-and-watch approach.

"If the situation arises, the diocese is ready to provide relief. According to government reports, five people have lost their lives due to landslides in the state and the Church is on alert mode if any help is required,” he said.

The Assam state government has set up 421 relief camps that are currently housing 91,518 people impacted by the floods.

Two camps in the Pobitora Wildlife Sanctuary were inundated, while another eight were affected, according to a report from the range officer.

The report said authorities at the sanctuary were taking preventive measures to protect wildlife including the famed one-horned rhinos.

Meanwhile, Himanta Biswa Sarma, the state's chief minister, said providing relief to those affected in Dima Hasao district, which remains cut off, is the priority of the government.