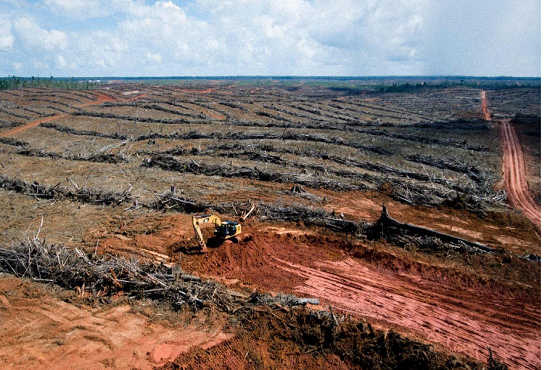 Activists said palm oil company, Korindo has destroyed thousands of hectares of forest in Papua to expand its business (Photo supplied by MightyEarth.org)

The Archdiocese of Merauke and civil society groups have decided enough is enough when it comes to massive deforestation by palm oil corporations in Papua and North Maluku provinces, Indonesia.

The civil society groups: Mighty, Pusaka, European Federation for Transport and Environment and the Korean Federation for Environmental Movement, released the results of an investigation on Sept. 1 showing that Korindo Group had destroyed 50,000 hectares of forest to expand its business.

According to Father Amo, the NGOs have appealed to the Ministry of Environment, the Papuan House of Representatives and the Governor of Papua to immediately visit and see the destruction.

Director of Pusaka Foundation, Y.L Franky said in a statement that in 2013 the company destroyed 30,000 hectares of forest, half of which was primary woodland. Last year, Korindo burned so much the smoke caused respiratory problems for locals and some infants died in a tragedy that cost Papua US$16 billion, according to Franky.

"They're [now] threatening another 75,000 hectares of primary forest which are under Korindo’s palm oil concession," he said. Smoke rises from what was once a forest during a land clearance operation in Papua. (Photo supplied by MightyEarth.org)

Elisabet Ndiwen, a tribal leader in Merauke, said that the forest in Papua is traditionally inhabited by hundreds of different tribes. Destroying the forest means uprooting them from their life and culture.

"I cried when I saw the forest destroyed. It’s sadistic. God created the environment with its beauty but humans destroy it," she said.

"People cannot speak against the destruction because they are afraid of being beaten by company enforcers," she said. In 2014, they reported the problem to the National Human Rights Commission, but received no reply.

Ndiwen said the local government was responsible because they did not consult locals when granting concessions. "The forest must be protected, because it’s a source of livelihood," she said.

Papuan parliament member Moses Yeremias Kaibu said the House of Representatives is drafting a regulation that will protect customary rights, which includes the protection of people, forest and habitat. "The parliament is working on the regulation and will finish it before the end of this year," he said.

Korindo Spokesperson Luwy Leunufna, also a Papuan, denied the accusations. He said that since the beginning of its operations in Papua, the company has followed government regulations and has not done anything outside the permit given by the Ministry of Forestry.

"There is no deforestation. It is not true," Leunufna told ucanews.com on Sept. 14. "I think there is a misunderstanding of terms used."

In fact, he said, the company works in a trans-Papua area 350 kilometers from Merauke, which means it has been a pioneer of infrastructure development in remote areas.

"Also, we open a new area by clearing the land, not burning it. We operate after agreeing with the people," he said.