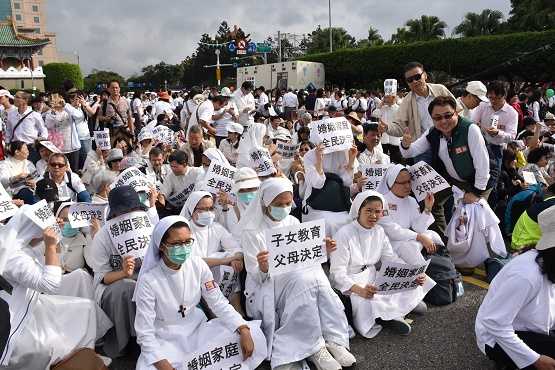 Taiwanese Catholics are polarized over the country's same-sex marriage bill even as over 200,000 people rallied against it over the weekend.

Taiwan Family, an amalgamation of different pressure groups which oppose same-sex marriage, organized three rallies on Dec. 3 to protest the bill that, if passed, would make Taiwan the first Asian nation to allow gay people to marry.

Together with representatives from Buddhist, Protestant and Taoist faiths, Father Otfried Chan, secretary general of the Taiwan bishops' conference, represented the Catholic Church at the rally where he gave a speech.

Father Chan said that sexual relations between men and women are very important as they relate to procreation and warned people not to be "reckless."

"For straight people who support same-sex marriage and when one day they would want to get married, gay activists will ask: 'Weren't you with us? Weren't you protesting and fighting for our rights? Why don't you get a same-sex partner?'" the priest said.

However, his words irked some Catholics, who found his language untactful and his argument poor.

Ignatius Tian, a Catholic commentator wrote an op-ed in reaction to the speech. It was published in the Apple Daily Taiwan newspaper on Dec. 5 and said that the priest's words do not reflect reality.

"Do they really care about the issue?" Tian said, adding that the priest's argument is substandard and they have not engaged with younger Catholics or sought their opinion.

A young Catholic from Taipei who identified himself as Paul said that many young people were disappointed with the priest's rhetoric.

"Most of us take the same stance as the church. But information without verification, abusive language and personal attacks by certain church officials make us angry and disappointed," he told ucanews.com.

Paul said that it is the middle-aged and elderly Catholics who support the church officials' rhetoric, not the youth. "Different opinions within the church are not uncommon but this is the most serious in decades," he said.

Paul was also angry that church groups were used to mobilize people for the rally even though Christians were encouraged via social media to treat the event as a civil matter and not to wear anything that identified them with their religions.

"They were afraid to disclose that they are Christians in front of gay people," Paul said.

The bill is currently awaiting a second reading in the Taiwanese parliament. More than 135,000 people support it and 47,000 oppose, in a poll run by the Apple Daily Taiwan on Nov. 17.

Earlier, Catholic bishops in Taiwan had issued a statement against the bill saying that amendments to the civil law will overturn the traditional monogamous marriage system, resulting in changes in the appellation of parents and grandparents, family ethics, moral values.