Church in Kashmir offers hope to people with disabilities

The ongoing conflict between India and Pakistan is injuiring people in the region, leaving them unable to work 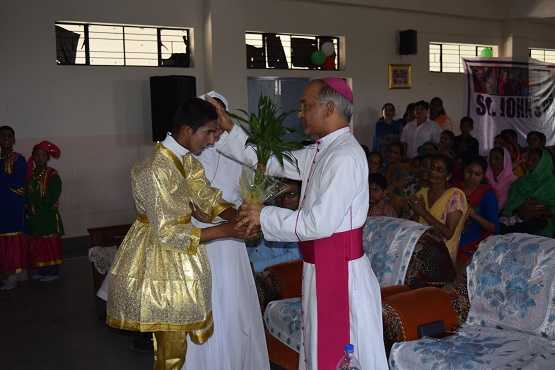 Bishop Ivan Pereira of Jammu-Srinagar blesses a disabled person after a dance performance at the church-run St. John's School for special children in this file photo. (Photo by Umar Shah)

Rajni Devi was a toddler when her parents noticed that her feet were not developing as expected. At the village health center, doctors told her parents that she was affected by polio.

"When you have a disabled child at home, life becomes difficult. I had no money to treat her and all I was doing was praying to God and seeking His help for my little daughter," said Devi's father Sudhakar Mehar.

The farmer who lives in the remote Bisnah village in India's northernmost Jammu and Kashmir state said his daily income "was not even enough to feed the family."

But help came from the Catholic Social Service Society, which launched a rehabilitation program for disabled children in the small hamlet, 12 years after Devi was diagnosed.

In 2015, "they took her to the doctor for an operation and provided financial assistance. She can walk now and plays with other children," Meher said about his daughter who is now 16 and wants to become a teacher.

Father Saiju Chacko, director of the social service of the Jammu-Sringar Diocese, which covers the entire state, said that they are currently supporting 72 children and have plans to expand their project.

"Apart from providing education, we are making every effort to make people aware that disabled people are very much part of the society and have equal rights," Father Chacko said.

The state has some 361,000 people with disabilities, according to census records, but various independent researches have put the number at double that of government statistics, claiming that some 120,000 of them suffer from orthopedic disabilities. Furthermore, 90,000 people face mild to severe types of mental illness, said Javed Ahmad Tak, an activist working for disabled people.

Orthopedic disabilities increase because of the armed conflict and political disturbances that frequently occur in the state, where militant Islamic groups fighting government forces in their effort to merge with neighboring Pakistan.

Jammu and Kashmir is India's only Muslim-majority state and borders Pakistan. Intermittent cross-border shelling between India and Pakistan has injured several people. The frontier districts bordering Pakistan are the worst hit and almost every family there has a person with a disability.

Tak claims that these people find "it hard to live a normal life" as the government "is not doing enough to accord them jobs."

"There are already less educational facilities for disabled people in the state and even those who are qualified have no jobs. The recruiting agencies ignore young people with disabilities," Tak said.

A state law asks all government departments including schools to provide facilities for disabled people such as ramps, toilets, signs in Braille and auditory signals in elevators. "There are many laws that talk about inclusiveness and equal opportunities, but on the ground, they are not very well implemented," Tak said.

Saif Ali, program coordinator of the social service, said that they are helping families integrate disabled people. "The formation and strengthening of family associations at community-based rehabilitation centers is our core agenda, besides promoting the basic rights of physically challenged persons," said Ali.

One example is the case of Sunny Ram, who was born with a disability in his left leg. His parents decided against sending him to school as they feared their son would be mistreated for being impaired.

"We wanted him to study but had no money to treat him. It was later that the church social service came to our aid," said Ram Chandra, Sunny's father.

The social service took Sunny to the national capital New Delhi where he underwent surgery on his leg. The 10-year-old Sunny now goes to school and the church is sponsoring his education, Ali said.

Catholic Social Service Society assistant director Father Prem Tigga said that their programs stress that disabled persons should not be treated as taboo and that, despite their limitations, they can contribute to society.

"We want to bring such people into the mainstream of society," Father Tigga said.