State orders Yining Catholic Church in Xinjiang region to have its crosses, statues and bell towers pulled down Under orders from communist authorities, workers in a crane get to work on removing religious features from Yining Catholic Church in Urumqi Diocese. (Photo supplied)

A church in northwest China's Xinjiang region had its crosses, statues, bell towers and other religious features demolished by order of communist authorities.

Using a crane, state-instructed workers removed the exterior religious features from the Catholic church of Yining city in Urumqi Diocese on Feb. 27.

A source told ucanews.com that no reason was given for the action but it  is believed to have been carried out because the religious features were "incompatible with sinicization." Yining Catholic Church before it had its religious features demolished. (Photo supplied)

The source said three crosses and two bell towers on the top of Yining Catholic Church were demolished and that all religious symbols, two big statues and any reliefs were removed.

"It was originally said religious features inside the church should been demolished as well but it was suspended without any reasons given," the source said.

The church received a letter from the authorities the day before informing them the demolition would occur.

The source said he was puzzled by what has happened to the church because of it occurred just before the Chinese People's Political Consultative Conference and the National People's Congress are both held in Beijing on March 3 and 5 respectively and while a Sino-Vatican agreement was supposedly being worked out. 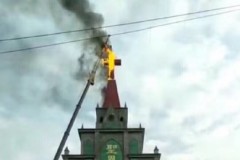 Cross burns as Chinese officials remove it from church 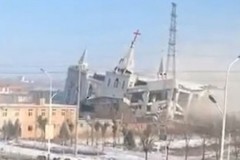 Chinese officials demolish yet another church: in Shanxi A crane is used to dismantle another cross from Yining Catholic Church. (Photo supplied)

The source said that last November a cross on a church steeple in Manas city of Xinjiang was also demolished for sinicization purposes.

"So it appears that crosses should be demolished for sinicization," said the source. "Maybe one day, all the churches will be demolished since they are so modern and beautiful and are against the purpose of sinicization?" he asked.

In eastern Zhejiang province, more than 1,500 churches, both Catholic and Protestant, have been targeted for demolition or cross removals in recent years, sources have said in a campaign against churches not coming under state control. Chinese authorities are increasingly using property regulations to remove crosses and demolish churches.

The source said he thinks what occurred to Yining Catholic Churchit may be related to local political tensions in the region. The Chinese authorities have long repressed ethnic minorities, especially the Uyghurs,  and religions in Xinjiang, often under the guise of fighting "terrorism." In recent months, tens of thousands of Uyghurs have been forced into reeducation camps and prisons across the region. Yining Catholic Church after it had its religious features removed. (Photo supplied)